In the Shadow of the Soviet Bear

The very existence of the Church in Eastern Europe is a testament to your enormous kindness – especially our long-term friends and benefactors who have witnessed the work done by ACN in helping the Church rise out of the ashes of Soviet oppression. ACN is consecrated to Our Lady of Fatima who warned against the perils of communism – this message was fundamental to the charity bringing reconciliation and compassion to those who were living behind the Iron Curtain.

Kazakhstan
Although Kazakhstan is predominantly Muslim, Christianity is practised by more than a quarter of the 19 million population. Catholics in Kazakhstan only make up 1% of the population, but are strengthened by their devotion to the Blessed Virgin Mary.
Moldova
Orthodox Christianity is Moldova’s main religion practised by 90 per cent of the 4 million population.
The first Catholic structures were established in 1227 by Pope Gregory IX and today, Catholics make up just under 1% of the population.
Georgia
The Georgian Orthodox Church is one of the world’s oldest Christian communities.
Since the 11th century, Catholics in Georgia have mainly belonged to the Latin rite.
Armenia
In 301 AD, Armenia became the first country in the world to adopt Christianity as its official religion. More than 90% of the 2.9 million population belong to the Armenian Orthodox Church. The Armenian Catholic Church is Eastern-Rite Catholic Church, making up less than 5% of Armenia’s population.

“Most of our parishioners are low-income people who do not have enough money for their children’s education and food…To give you an idea, the average Sunday collection is 500 tenge” – around £1!

£25
can help empower Christian women with life skills.
Donate
£60
can help provide transport for priests and Sisters
Donate
£100
can support the work of Sisters for 3 months.
Donate
£250
can contribute towards restoring churches and chapels.
Donate

To request hard copies of our prayer cards or to receive our monthly mailing via post, please email us at [email protected] 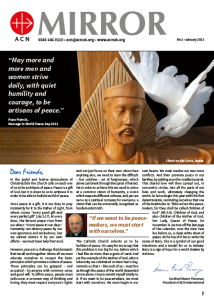 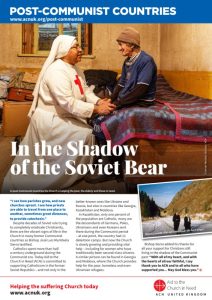 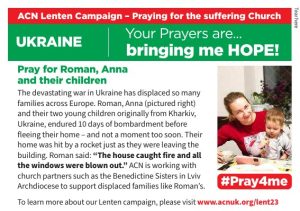