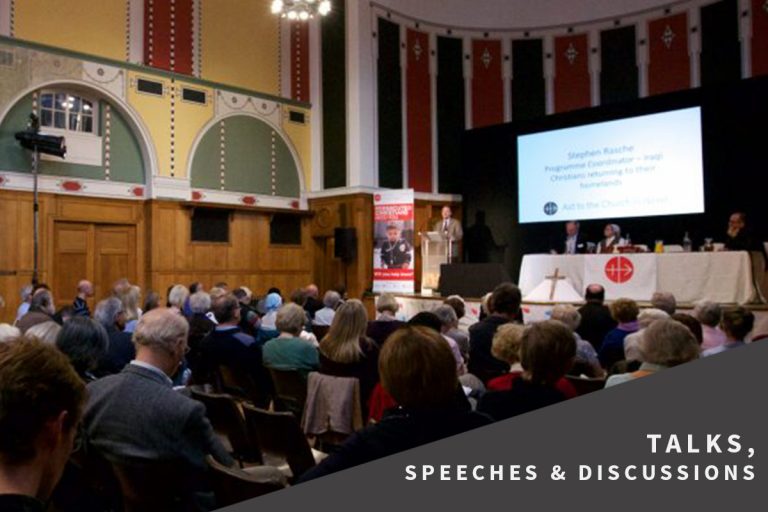 In October 2017, we welcomed guests from the persecuted Church around the world who told their stories and testimonies about being on the front line of faith.

We cannot thank you enough for coming along and getting involved with our annual event, and supporting persecuted Christians around the world. Below are selection of videos from highlights of the event alongside the talks from all our guest speakers.

John Pontifex spoke about the release of the new: Persecuted and Forgotten? A report on Christians oppressed for their Faith 2015 – 2017

Bishop Matthew Kukah
Bishop Kukah is an outspoken advocate on behalf of suffering Christians in northern Nigeria. The Bishop leads a diocese close to some of the worst persecution inflicted by Islamic militants Boko Haram. He spoke about the needs of his people and how they are persevering in Faith against all the odds.

Melkite Greek Catholic Archbishop Issam John Darwish of Zahle and Furzol, Lebanon
Archbishop Darwish is helping refugee Christians from Syria who have fled extremism and violence. Many of those who are displaced are totally reliant on the Church for their daily needs. He gave an account of the situation for Christians in the region.

Sister Annie Demerjian RJM, from Aleppo, Syria
Sister Annie is one of ACN’s key project partners in Syria – offering emergency help in the worst-affected areas of Aleppo and Hassake. She leads a team of volunteers who provide food, shelter and medicine to suffering families. Sister Annie gave an update on the current situation in Aleppo.

Father Salar Kajo
Father Salar Kajo is the parish priest of St George’s Church, Teleskeof, a largely Christian town and neighbouring villages in Nineveh, northern Iraq. He is overseeing the resettlement of the faithful back in the town which was badly damaged by Daesh (ISIS) and other militant groups. He is a key project partner for ACN which is repairing damaged homes and St George’s Church.

Patricia Hatton, Head of Fundraising and Market ACN UK & Closing Prayer
Patricia Hatton, spoke about the importance of #RedWednesday and how everyone can get involved and stand in solidarity with our brothers and sisters alongside closing prayer by our Ecclesiastical Assistant, Father Dominic.