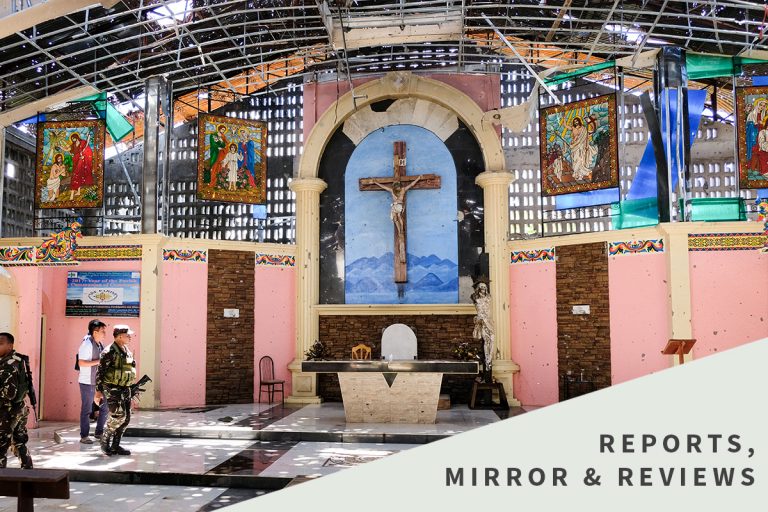 SUPPORT CHRISTIANS IN THE PHILIPPINES

At least 20 people died and more than 100 were injured in the Philippines when bombers struck during morning Mass at Our Lady of Mount Carmel Cathedral in Jolo.

Islamist groups claimed responsibility for the January 2019 attack – and may have been responsible for an attack on a mosque in the same city a fortnight later. Jolo Cathedral’s Father Romeo Saniel told ACN: “No words can describe the sorrow and pain that we feel these days.”

At the time, the Church was still helping survivors of the five-month siege of Marawi by Islamist extremists, during which St Mary’s Cathedral was destroyed. Jihadists posted footage of themselves ransacking the cathedral. By the time government troops took back control of Marawi, 27,000 families had been displaced – including more than 8,000 children.

Despite St Mary’s Cathedral being devastated, Bishop Edwin de la Peña of Marawi has deferred rebuilding it to focus on rebuilding shattered lives instead.

In Marawi ACN is helping the Church to:

In this report you will also read about other ways the charity is helping, including support for Sisters and seminarians – and helping rebuild Jolo Cathedral. Your support means that ACN can go some way to answering Pope Francis’ prayer to “convert the hearts of the violent, and grant the inhabitants of that region a peaceful coexistence.”