Aid to the Church in Need came into being in 1947 when a young Norbertine priest, Father Werenfried van Straaten – whose name means “Warrior for Peace” – responded to an appeal for reconciliation made by Pope Pius XII in the bitter early years after World War II. He set out to organise emergency relief to meet the material and spiritual needs of the suffering German people. 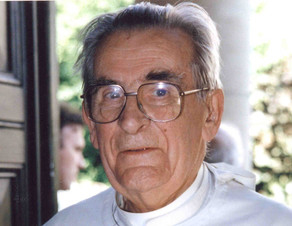 Father Werenfried van Straaten, founder of Aid to the Church in Need

With the help of thousands of concerned and compassionate people he more than succeeded. His impassioned preaching and calls for reconciliation touched hearts and supplies of clothes and food poured in – particularly sides of pork – earning him his nickname, the Bacon Priest.

At the same time, recognising a deep spiritual hunger, he launched a ‘Rucksack Priest’ campaign to send priests out on motorbikes and early Volkswagen Beetles to people still displaced, bereft and in need of spiritual comfort. This was soon followed by a Chapel Truck initiative using decommissioned army trucks which were adapted as mobile chapels from which Mass could be said.

Father Werenfried during one of his homilies at the chapel-truck.

Building a worldwide network of support for the suffering Church

In the 1950s, Father Werenfried worked tirelessly to assist religious serving within Communist countries, especially in Hungary, to help contemplative Sisters in Poland and to launch a massive aid campaign. His passion and commitment helped Aid to the Church in Need to build “fortresses of God” – churches constructed along the length of the Iron Curtain. From this time onwards he began his drive to bring Christ not only to Russia and Eastern Europe, but to all those being “tested in faith” around the world. Aid to the Church in Need began to grow in size and scope.

Becoming “one of the most important Catholic charities”

Such has been the impact of Aid to the Church in Need’s work worldwide that in June 2002 the charity was described by the then-Cardinal Joseph Ratzinger (now Pope Emeritus Benedict XVI) as “a gift of Providence for our time”.

He stated that Aid to the Church in Need had “…turned out to be one of the most important Catholic charities… It is working in a worthwhile manner all over the world.

During his pontificate, in December 2011, Benedict XVI recognised the importance of Aid to the Church in Need’s work by elevating the charity to a Pontifical Foundation of the Catholic Church.

Thanks to the generous support of our Aid to the Church in Need family of faithful, Father Werenfried’s vision lives on.

Today, our General Secretariat and Project Headquarters is based in Königstein, Germany. With 23 national offices, Aid to the Church in Need continues to reach out wherever the need is greatest, bringing spiritual and material aid to millions of poor, forgotten and persecuted faithful in more than 140 countries around the world. 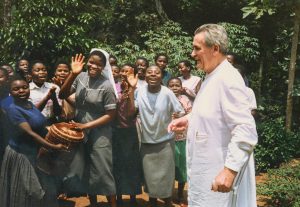 Father Werenfried during a visit to the “Daughters of the Resurrection”

Father Werenfried’s inspirational and powerful charism is reflected in the Spiritual Guidelines which he wrote to guide the charity’s work. These are still one of the foundations our work.

Aid to the Church in Need’s mission is to make known the pastoral and spiritual needs of the faithful to Catholics and other Christians in the UK and around the world.

As well as supporting Christians who suffer for the Faith and are in pastoral need, we also encourage our benefactors to keep the Faith in an increasingly secularised and materialist world. Through Aid to the Church in Need we are linked together heart to heart, in a chain of faith, hope and charity across the world.

Father Werenfried van Straaten, the late Founder of Aid to the Church in Need, once said that our organisation was established to help the Church “wherever she is persecuted, threatened, undermined or destroyed and suffers need as a result”.

In his day the biggest challenge was the oppression of the Church behind the Iron Curtain, where communism tried to eradicate religious belief and replace it with atheism. In the USSR countless Christians were sent to the gulags and according to one estimate more than 20 million Christians died for refusing to renounce their faith.

With Christians suffering at the hands of anti-religious regimes, Fr Werenfried said that Aid to the Church in Need helps “through prayer, sacrifice, conversion, information and active charity to heal the wounds inflicted by atheism”. This work continues today in communist countries such as China, Vietnam and elsewhere.