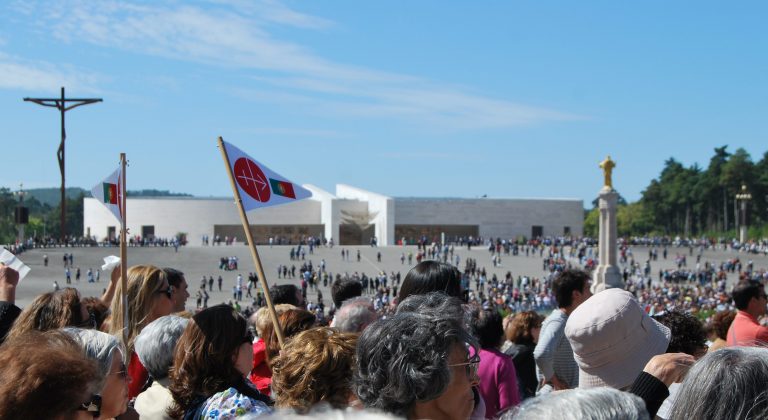 The itinerary is a guide and subject to change

Feast of the Most Holy Name of Mary.

Heathrow – Lisbon – Fatima. Our flight departs from Heathrow Airport at 8:10am, arriving at Lisbon at 10:45am. We travel from the airport by coach, and check into our 4-star hotel in Fatima for a three-night stay. Lunch at choice.

In the early evening, we congregate with our fellow international ACN pilgrims at the Paul VI Auditorium, followed by the official opening of the pilgrimage and Rosary in the Shrine of the Apparitions. After supper at our hotel, later in the evening there will be an ACN candlelight procession with the statue of Our Lady of Fatima in the Sanctuary Square followed by Holy Mass for all ACN pilgrims celebrated in the Sanctuary Square. Dinner will be in our hotel.

After lunch at choice, we are free to visit the Shrines of the Apparitions of Our Lady and the angels, and see the homes of the children, and possibly relatives of Jacinta, Francisco and Lucia. Please note, visits to these sites are not included.

Feast of the Exaltation of the Holy Cross

After breakfast at the hotel, there will be the opportunity for private devotions, shopping or a visit to the O Milagre de Fatima museum, which recreates the historical events from the beginning of the 20th century, the apparitions of the Angel of Portugal, the apparitions of Our Lady Fatima and the Miracle of the Sun. Also worthy of a visit is the Fatima wax museum next to the sanctuary. Please note, visits to these sites or museums are not included.

Lunch is at choice, followed by Holy Hour in the Chapel of Divine Mercy. The rest of the afternoon will be for Testimonies and reflections from different guests from all around the world. These will be followed by the Rosary and Holy Mass in the New Basilica of the Sanctuary. This evening we join the ACN coaches to transfer to a local restaurant for dinner (included) with all ACN international pilgrim groups.

Feast of Our Lady of Sorrows

After breakfast, we take part in the concluding Holy Mass presided by Cardinal Piacenza in the Shrine of the Apparitions. The rest of the morning will be at leisure, with lunch at choice.  In the afternoon we transfer to Lisbon Airport for our return flight, which arrives back at Heathrow at 10:55pm.

Please note: During the pilgrimage there will be the opportunity for silent adoration and confession will be available in different languages in the sanctuary as well as with our ACN U.K. Ecclesiastical Assistant, Fr Dominic Robinson SJ.

Booking your place on the International ACN Pilgrimage to Fatima

Pax Travel will be taking all bookings on behalf of Aid to the Church in Need. Please contact them on 020 7485 3003 or by emailing [email protected] for more information and to book your place.