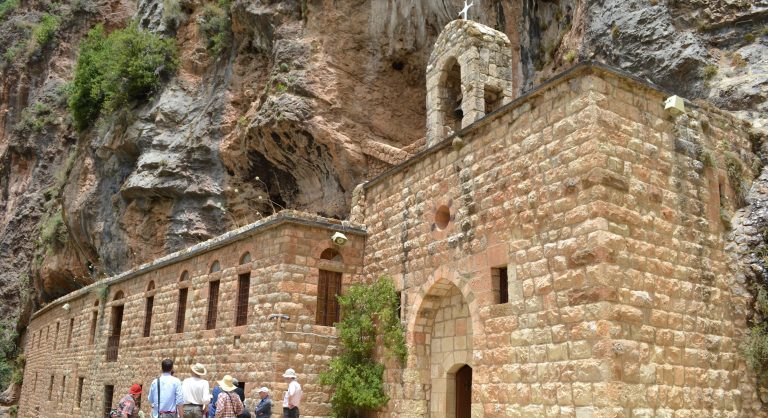 We hope you will join on on this opportunity to walk in prayer and pilgrimage. The trip will include visits to ACN project partners, as well as places of historic importance

This itinerary is a guide and subject to change.

Check in for our 1:30pm departure MEA flight at London Heathrow Airport, Terminal 3 to Beirut Airport with your ACN representatives. On arrival at Beirut Airport, proceed through passport control where you will be met by a local representative who will escort you from the baggage reclaim to the coach and local guide.

Mass in the chapel at the Notre Dame du Puits Convent followed by breakfast. We depart by coach to the centre of Beirut. There, we visit Beirut National Museum, followed by the centre ville of Beirut including; the Canaanite well, Martyrs Square, the souks, the synagogue, the Capuchin Church, the Roman bath, the Serail, Star Square, al Omari Mosque, St George Orthodox cathedral, St Elijah Catholic Cathedral, St George Maronite Cathedral and Mohammad el Amine Mosque, Saifi village and the ruins between the churches & mosques.

Lunch will be at choice at the Karam Restaurant in Beirut. We re-join our coach and drive along the corniche. We conclude our visit to Beirut with a visit to the Pigeon Grotto. We re-join our coach and return to Notre Dame du Puits Convent. In the evening we will be joined by Mother Marie Bernard Haddad, Superior of the Ephraimite Sisters (Syriac Catholic), accompanied by another sister, and Mr. Michel Constantin, Director of Pontifical Mission in Lebanon for dinner at the convent.

Breakfast at the Notre Dame du Puits Convent. We depart by coach to Beiteddine (“The House of Religion”) in the Chouf. We meet Bishop Elias Nassar, who will introduce us to local Christians. We visit Deir el Qamar, the first capital of Mount Lebanon (17th – 19th century), a picturesque town with old palaces, a 16th century church, mosque and synagogues.

Arrival in Sidon, once an important provincial city, which became part of the Roman Empire in the 1st century AD, visited by St Paul on his journey to Rome. After St Paul’s visit the city fell into decline, but became a bishopric under the Byzantines. In the 7th century it was captured by the Umayyads, but was recaptured by the Crusaders in the 12th Century. We visit the Greek Catholic Cathedral of St Nicholas, where we hope to meet Archbishop Elie Haddad, Greek Catholic Bishop of Sidon, and share lunch with local priests and seminarians (a small donation would be appreciated to cover the cost of lunch).

After lunch we meet our coach and drive 30 km south to Tyre. In Tyre we visit the Roman ruins where Paul stayed on the last night of his third missionary journey from Ephesus to Jerusalem. In AD58 it was here that local Christians are said to have warned Paul that it would be unsafe to continue his journey to Jerusalem. Mass will be celebrated at the Maronite Cathedral in Tyre, where we hope Mgr. Chucrallah Nabil el Hajj, Maronite Bishop of Tyre, will be able to concelebrate.

After Mass we rejoin our coach and return to Beirut. We return to our accommodation at Notre Dame du Puits Convent where supper will be served.

Breakfast at the Notre Dame du Puits Convent. We depart by coach to Byblos, north of Beirut. We visit the town of Byblos (40 km), with its Byzantine church and Crusader castle. We also visit the 12th century Maronite Church of St John-Marcus where Mass will be celebrated. We next meet Fr Elias Aghia of the Melchite Missionaries of St Paul at the Basilica of St Paul, in Harissa.

Here we will join the Missionaries for lunch (a small donation would be appreciated to cover the cost of lunch). Afterwards we visit the Shrine of Our Lady of Lebanon before returning to Beirut. We hope to join Mr Jacques El Kallassi of Télé Lumière for dinner at his residence in Chahtoul, where we will have the opportunity to hear about the important work of Télé Lumière first hand.

Bishop Roland Aboujaoudé, Chairman of Télé Lumière, Bishop Nabil Andari, Bishop of the Diocese, Mgr. Gabriele Caccia, the Apostolic Nuncio and Mgr. Chekrallah Nabil el Hajj are also hoped to attend. We return for our last night in this part of the itinerary at Notre Dame du Puits Convent.

Mass in the chapel at the Notre Dame du Puits Convent followed by breakfast (please bring all your luggage to reception after breakfast). We set off for Faqra. We visit the ruins of Faqra, the ruins of a Phoenician temple and a Roman tower. Located 55 Km from Beirut, Faqra hosts predominantly Roman ruins at an elevation of 1,550 metres. The archaeological site is a collection of temples, columns, layers, and rock cut tombs, along with the ruins of a Phoenician temple to the Goddess Astestre and the tower of the Roman Emperor Claudius.

We next visit Faqra’s natural stone bridge which was carved out of the rock by wind and rain so perfectly that early chroniclers claimed man had a hand in its making. This 34m bridge is known as “Jisr el Hajar”, or natural bridge. Lunch will be at choice at the Kasr El Sanawbar Restaurant Ghazir. We visit the Motzart Vineyard where we enjoy wine tasting followed by a guided tour of the vineyard.

Mass will be celebrated at the Monastery of St Anthony of Qozhaya followed by breakfast. We meet our coach. The word ‘Qadisha’ comes from the Semitic root meaning ‘Holy’, and Wadi Qadisha is the Holy Valley, filled with caves and rock shelters, inhabited from the third millennium BC to the Roman period.

The valley is scattered with cave chapels, hermitages and monasteries. We will visit some of these. Meet with Bishop Maroun Aammar, Maronite Bishop of Bsharre. Lunch will be at choice at the Abou Joseph Restaurant. We rejoin our coach and drive to the Gibran Monastery Tomb and Museum, which we visit, also enjoying the spectacular views of Bsharre and the Qadisha Valley. In Bsharre, we visit the Khalil Gibran Museum and tomb.

Mass will be celebrated at the Monastery of St Anthony of Qozhaya followed by breakfast. We meet our coach and drive to Bqaa Kafra. We visit Bqaa Kafra, the highest village in Lebanon at 1,750 metres.

It is famous for being the birthplace of St Charbel, whose father’s house was transformed into a church. Mass will be celebrated in the Church of St Charbel. We rejoin our coach and drive to the Cedars Forest. We visit the Cedars Forest (the Cedar is the symbol of Lebanon), said to be 6,000 years old. The cedar wood from this forest was sent to Solomon for the construction of his Temple and Palace.

We have the opportunity to purchase lunch at Ouyoun Orghoc, in the Bnachee lakeside restaurant. We rejoin our coach and return to the Monastery of St Anthony of Qozhaya (or Hotel Le Tournant) for dinner on our final night in the north.

Mass will be celebrated at the Monastery of St Anthony of Qozhaya followed by breakfast. We depart by coach and head south to Balamand. Visit of the 12th century Cistercian Monastery at Balamand.

We also visit the ruins of a Crusader castle and medieval churches at Anfe. We rejoin our coach and drive towards the Mediterranean Sea to the beautifully-located convent of Our Lady of the Light (Saydet el Nouriye) in Hamat. We visit Our Lady of The Light at Hamat, where many miracles have been attributed to Our Lady by pilgrims to this holy site. Lunch will be at choice at the White Beach Restaurant in Batroun.

Breakfast boxes will be distributed at Notre Dame du Puits Convent before departure. We meet our coach and travel to Beirut Airport where we check in for our 8:10am departure from Beirut to London Heathrow Airport, Terminal 3, arriving at 11:15am.

*For those who would like, an upgrade to stay at Hotel Le Tournant can be requested (but is subject to availability) for a supplement of £390 per person for the 3 nights including breakfast for either sharing twin-bedded room or having a single room.

Booking your place on the ACN Pilgrimage to Lebanon

Pax Travel will be taking all bookings on behalf of Aid to the Church in Need. Please contact them on 020 7485 3003 or by emailing [email protected] for more information and to book your place.

Please note that if you have an Israeli entry visa stamp in your passport you will need to have your passport reissued before travelling to Lebanon. Your Passport must have at least six months validity remaning from the dare of re-entry into the UK.

This tour involves a substantial amount of walking, some of which may be over irregular surfaces such as cobblestones and badly-maintained walking areas. If everyday walking is something you find difficult, this tour may be unsuitable for you.

This itinerary is a guide and subject to change.