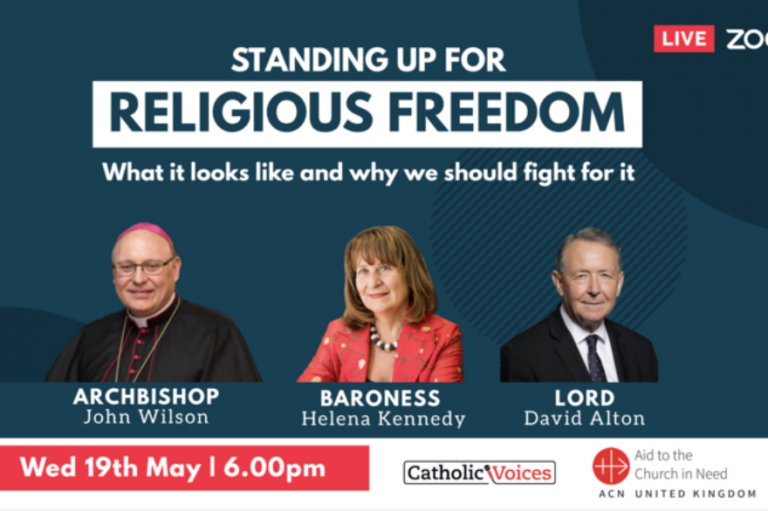 Religious freedom is often described as an “orphaned right”. Be it the place of religious faith in the public square, the right to express views informed by religious beliefs, the right to convert or even freedom of worship, there is a growing awareness that this liberty, central to a free society, is under-recognised and frequently trampled on. More needs to be done to stand up for faith and freedom.

While there are widespread concerns that religious freedom is pushed to the margins in the West, in many countries in the world, to act in accordance with your religious beliefs is to put your life on the line, risk arrest, physical violence or worse.

A central finding of the Aid to the Church in Need (ACN) Religious Freedom in the World 2021 Report is that religious freedom is violated in almost one-third of the world’s countries and that the situation has declined in more than 95 percent of the nations where the problem is most severe.

Now, ACN is joining forces with Catholic Voices (CV) to host a webinar on Wednesday, 19th May at 6pm – a unique opportunity to frame the question of religious freedom in the context of current events which have made the issue increasingly topical – growing religious persecution in countries such as China and Nigeria, international relations, COVID restrictions and digital media.

At the event, which will be chaired by ACN(UK)’s Head of Press & Information John Pontifex, who served on the editorial board of ACN’s ‘Religious Freedom in the World 2021 Report, our line-up of invited speakers are:

• Archbishop John Wilson of Southwark
• Baroness Helena Kennedy QC of the Shaws
• Professor the Lord David Alton of Liverpool
And
• Seminary rector Father Habila Daboh, of Kaduna, northern Nigeria, who will give testimony following the abduction of four of his students, the youngest of whom, Michael Nnadi, 18, was killed.

Please join us for what promises to be a very lively and engaging discussion designed to help empower people to engage in this topic and reframe the debate around the place of religion in the public square and the importance of articulating an informed conscience. Use the button below to register.