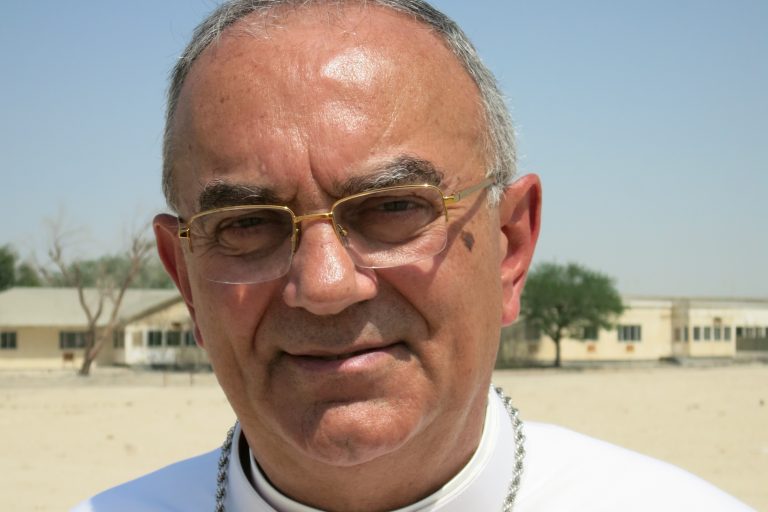 A Bishop who died on Easter Sunday after a lifetime of ministry in some of the most difficult places in which to be a Christian, has been praised for his “courageous and dynamic apostolate in the heart of Islam”.

Comboni Missionary Bishop Camillo Ballin, who died aged 75 after on a long illness on 12th April, ministered across the Middle East before being appointed the first ever Apostolic Vicar of Northern Arabia, covering Bahrain, Kuwait, Qatar and Saudi Arabia.

Paying tribute to the bishop, Father Andrzej Halemba, Middle East projects coordinator for Aid to the Church in Need (ACN), said: “His was a very courageous and dynamic apostolate in the heart of Islam.

“Bishop Ballin never denied his Christianity but at the same time he earned the respect of others by his command of Arabic and his respect for Arabic culture.”

Father Halemba said that Bishop Ballin wore his cassock and cross even in parts of the Gulf where symbols of Christian faith are not welcome or banned.

The ACN projects head said Bishop Ballin’s priority was meeting the needs of a community who are growing in number, as compared with the Middle East as a whole where the faithful are in marked decline.

ACN was a key funder of Bishop Ballin’s biggest initiative, the erection of Bahrain’s Our Lady of Arabia Cathedral, a huge 2,500-seat structure, complete with 16 multi-purpose halls.

As a result of negotiations with Bishop Ballin, King Isa Al Khalifah of Bahrain gave the Catholic Church two acres of land on which to build the cathedral, which, on its completion, will serve 2.5 million faithful from countries across the vicariate.

The cathedral, whose construction is far advanced, is seen as a break-through in Church-State relations and a sign of the coming of age of a growing Christian community.
Father Halemba said: “Bishop Ballin showed great determination in overcoming many, many challenges in support of the pastoral needs of a community who included many foreign workers from the likes of the Philippines, India, Pakistan, Bangladesh and South Korea.

The practice of Christianity in the Arab Peninsula is severely restricted, especially in some countries, and is mostly limited to the grounds of foreign embassies and private homes.
Priests are generally not allowed to appear in public dressed in clerical garb and Muslims are strictly forbidden from converting to Christianity.

Father Halemba said: “[Bishop Ballin’s] legacy is his example of courage, enabling people to live out their faith in a place where it is frequently difficult to practise Christianity and his great work to ensure that the Christians are fully respected in the heartland of Islam.

“I remember that he always said that it is important for Christians to witness to the love of God wherever they are.”