It’s 1.30am as we fly through the night sky and finally touch down in Baghdad where we begin our packed day of visits to Christian communities.

All the parishes are massively reduced in number as a result of persecution and poverty. Armenian Orthodox Archbishop Avak Asadourian, Secretary General of the Council of Church Leaders in Iraq, tells us that after 43 years as bishop: “I have stopped counting how few people are coming to our church. It hurts too much.” But, amid the shadows, there are bright rays of light, as the Papal Nuncio to Iraq told us: “The challenges are great but thanks to ACN there is hope for the future.” 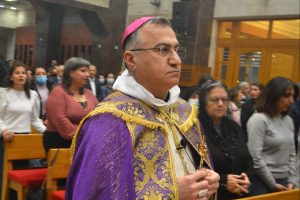 At a meeting in Ankawa, a majority Christian district outside Erbil, the charity’s main project partner Archbishop Bashar Warda begins: “You at ACN have helped save us from extinction here in Iraq. Now our aim is not just to survive but to thrive.”

Intent on genocide, Daesh (ISIS) extremist militants triggered a mass exodus of Christians from their ancient homelands. ACN provided emergency help – food, shelter, medicine and schooling. The Archbishop takes us to the basement of the Catholic-run Maryanama Hospital and shows us the COVID oxygen cylinders which ACN provided as the virus ravaged the country.

We make our way to Al-Tahira Church in Baghdeda (Qaraqosh). The last time I was here, the place was covered in black soot, statues and other sacred images had been defaced, the cloister outside had been used as a shooting range and was covered in bullet holes.

Now, with help from ACN, the building has been completely renewed, one of hundreds of homes, churches, parish halls, kindergartens and other structures rebuilt or restored by the charity. This town, formerly occupied by Daesh, has now been liberated and 25,000 – half the population – are back. A year ago, Al-Tahira Church was packed to overflowing when Pope Francis came to visit.

In the Christian town of Karamlesh, we are welcomed to St Addai’s Church and there visit the tomb of Fr Ragheed Ganni. Aged only in his early 30s, he gave his life when extremist militants pounced on him and killed him for refusing to shut his church. Fr Ragheed is said to have responded: “How could I close the house of God?”, moments later he was dead.

Fr Ragheed, whose priestly training had been funded by ACN, is being considered for canonisation. Parish priest Father Addai Babaca said: “We are looking forward to Fr Ragheed being made Venerable [a stage towards being made a Saint]. We have put his remains in a sacred box. His courage and self-sacrifice are an inspiration to us all.” 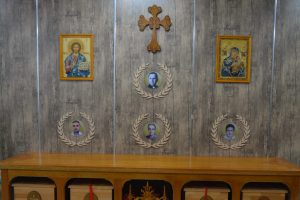 Back in Baghdeda, we visit Al-Tahira Secondary School of St Catherine of Siena. The school is unique in that it was built from scratch – unlike other ACN building works in the region where the charity has restored churches, schools etc damaged by Daesh.

ACN was involved in providing more than 80 percent of the funds for Al-Tahira Secondary School. It was so exciting to see the young people and meet the Dominican Sisters who run it. These Sisters have done everything possible to see the building through to completion. One pupil, 16-year-old Rameel Wadi, told me: “With buildings like this and a chance to study well, we have a big future here. Thank you so much for supporting us.”

Another very early start and this time our destination is Alqosh, where ACN funded Alqosh Medical Health Centre. Packed into a series of caravans are a pharmacy, dentist’s surgery, laboratory and doctor’s surgery, all served by medics offering their services at a heavily subsidised rate.

I have been with ACN for nearly 20 years and few days have been more emotional than today. We took a trip to the Christian town of Batnaya. When I was last year, it was like a scene from a disaster movie – everything rubble and destruction: even the cemetery had been smashed up. 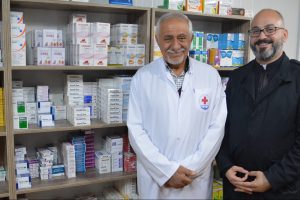 Thanks to ACN’s benefactors, the charity has been restoring St Kyriakos Church, the Mary Immaculate Chapel, the parish library and a kindergarten run by the Dominican Sisters. Shortly afterwards, the church opened its doors to Massgoers for the first time since before the Daesh invasion eight years ago. Up to 500 people are back and when we turned the corner into the town, we saw youngsters playing football, we passed shops and businesses. We also saw the churches being restored and brought back to life. 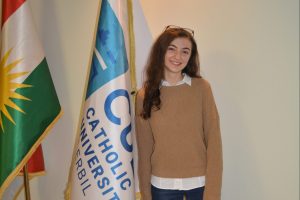 A student from the Catholic University of Erbil

Back in Ankawa, we visit the Catholic University in Erbil (CUE). The brainchild of ACN project partner Chaldean Catholic Archbishop Bashar Warda of Erbil, there are now as many as 283 students at CUE. Vice-Chancellor Father Dankha Joola explained: “We are overwhelmed with the number of applicants.”

He explained that this year they had nearly 1,500 applicants but only had places for 168. CUE’s popularity is obvious.

Expanding fast, CUE now boasts departments in everything from English right the way through to Medical Laboratory Science, a programme ACN has helped to fund. The charity has also sponsored the Pope Francis Scholarship Programme, which has 150 students.

I spoke to architecture student Joudy Fouad. Aged 18 and in her first year, Joudy told me: “What I like most about CUE is the environment. Everyone is friendly. You feel the teachers really care. I was dreaming of being at a university like this and here I am. I really appreciate all the help ACN has been able to give.” 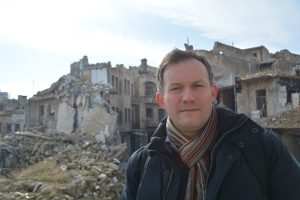 This fascinating trip has now come to an end. It’s time to say farewell to Iraq and return home. But never will I forget this beautiful ‘Cradle of Christianity’, as the Church in Iraq is often called. Against all odds, this community has survived in spite of suffering a genocide. My prayer is that their future as a Christian community is every bit as bright as their past is rich in history.