St Gregory Nazianzen wrote these words with his departed friend and fellow theologian St Basil the Great in mind. Both saints dedicated a lifetime of sacrifices to the glory of the Church.

St Gregory Nazianzen is a Doctor of the Church. He was born in 325 at Arianzus, near Nazianzus, in what is now Turkey and died there in 389. St Gregory Nazianzen is remembered as saint first and a most gifted and a diligent theologian second. His writings include his reflections on the mystery of the Holy Trinity.

ACN supporting the suffering Church in Turkey – Franciscans in Constantinople

Catholic charity, Aid to the Church in Need is helping the Catholic faithful in Turkey today. The restoration of churches and convents has been carried out thanks to the generosity of ACN benefactors. This support goes to historical churches in Turkey as well as helping with practical issues such as providing water boreholes and new water pipes that is of essential help for religious Sisters and other communities in the country.

Pictured above are Franciscans at the restored convent of St Maria Draperis in Istanbul, Turkey. The restoration was carried out thanks to the generosity of ACN benefactors. It is the oldest Latin Rite Catholic church in the Turkish capital Istanbul, where the Franciscans have had a presence in since the 18th century. Today there are four Franciscan monks living and working there. 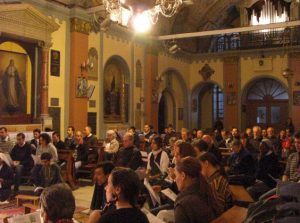 Thanks to ACN benefactors, Catholics in Turkey are celebrating Holy Mass in the restored side-wing of the Franciscan Convent St Maria Draperis, Istanbul

Even just 100 years ago there were three millions Christians in Turkey, now there are less than 200,000 Chrisitians remaining. The Church in Turkey continues to preach Christ’s message of peace. The teaching of the Gospels served as inspiration and succour to St Gregory Nazianzen over 1,500 years ago as it does to Catholics in Turkey today.

The charity is also supporting the work of the Church in Turkey with refugees. Since 2016, ACN’s benefactors have donated more than £38,000 (€45,000) to help Christian refugees in Turkey coming from Syria, Iraq and other countries.

St Gregory Nazianzen’s writings helped to remove a considerable threat to the Church at the time – Arianism, which was a popular heresy that attempted to deny the divinity of Jesus Christ. St Gregory Nazianzen described the mystery of the Holy Trinity, “one God in three persons, the ‘consubstantial Trinity’” (Catechism of the Catholic Church, 253). The mystery is the Father, the Son and Holy Spirit being three persons or hypostases yet one within the unity of the Godhead or to state in its simplicity: three in one and one in three. 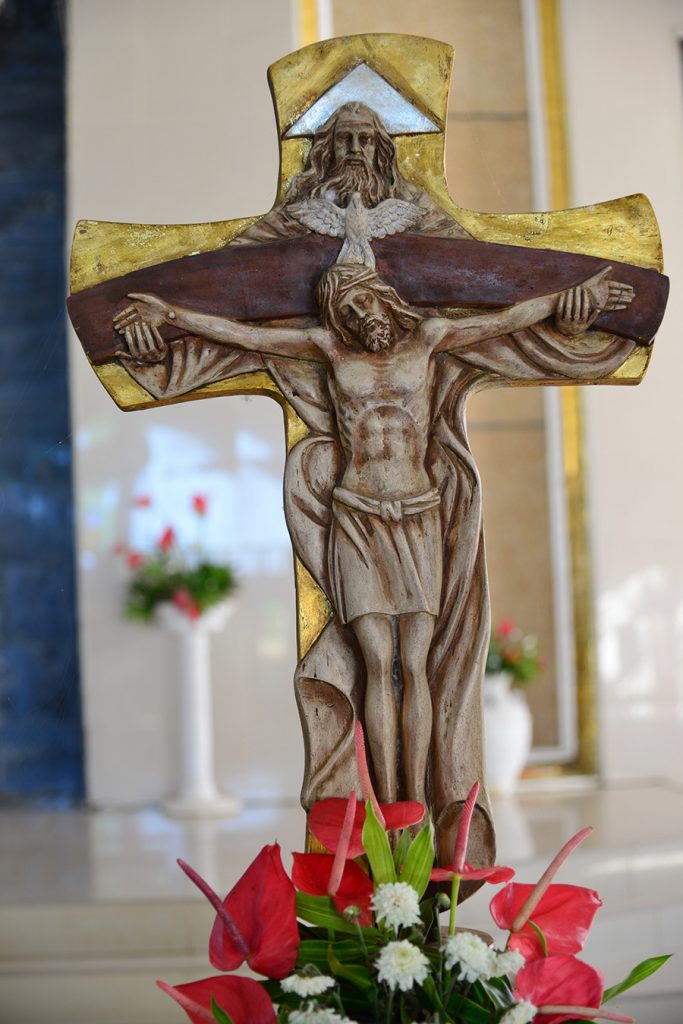 ACN photograph of a crucifix portraying the Holy Trinity Father, Son and Holy Spirit taken by Fr Andrzej Halemba at St Michaels Church in the Diocese of Cebu of Tapilon, Philippines

With hesitation and reluctance, St Gregory Nazianzen was persuaded by bishops to go to Constantinople, Turkey in 379 to serve the remaining Catholics that were persecuted there. This flock was without either church or priest. This may not have been a role suited for his skilled intellectual temperament but the saint carried his daily cross in his committed obedience to the Church.

It was in Constantinople that he experienced his best moments and the worst trials. He delivered the discourses on the Trinity and taught St Jerome. St Gregory Nazianzen was later to be praised as an eloquent teacher by his former student. 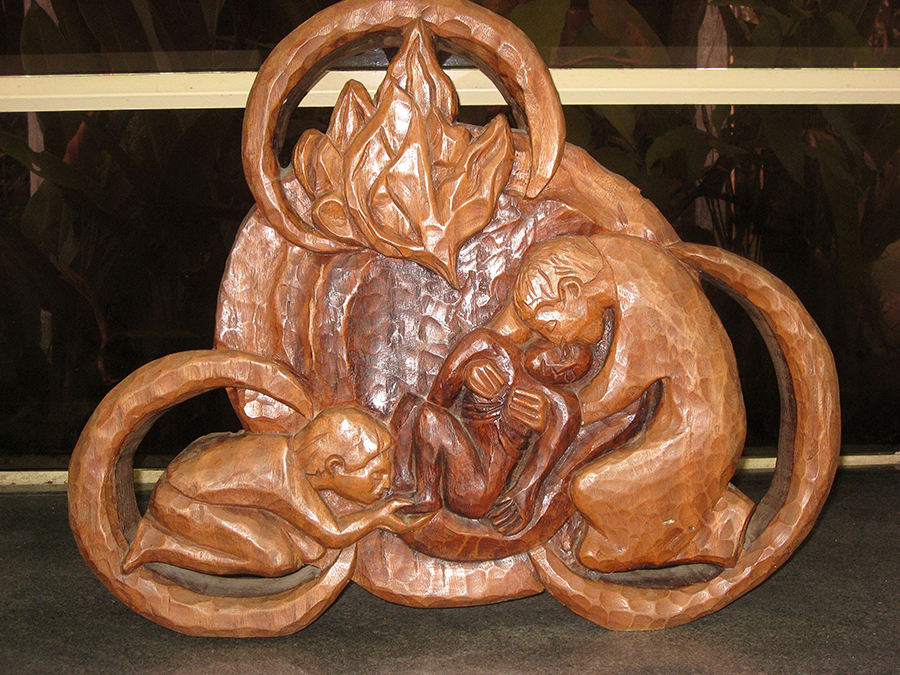 ACN photograph of wooden art symbolizing the Holy Trinity in the chapel of the Seminário de Filosofia Pe. João Martins in the Rio Branco Diocese, Brazil

But on another occasion he was attacked by a hostile mob of Arians. Unfortunately he was also subject to attack from his own when he was openly accused of being in error about his understanding of the Trinity. At times, he found his fellow Christians to be like to a “flock of jackdaws” and they “attacked him like a swarm of wasps.”

ACN helping in the renovation of a church in Smyrna, Turkey – supporting the small number of the faithful there

The Church of Santa Maria is in the diocese of Smyrna in the city of Izmir. This is the third largest city in Turkey, located on the Aegean coast.

The dome of the Church was designed by Gustav Eifel, the famous engineer who built of the Eiffel Tower in Paris and the Statute of Liberty in New York. Fr Francesco De Luca, an Italian Franciscan at the church, said: “It is one of the oldest and most beautiful churches in Turkey and remained intact even during the many destructions that took place in the last century.” Fr Francesco asked Aid to the Church in Need for help, adding: “In fact, the existence of the Catholic community in Turkey largely depends on donors from outside.”

“To continue to this day…” (Joshua 9:27) – the Catholic tradition in Turkey

As a youngster, St Gregory Nazianzen went to the famous Caesarea School in the capital of Cappadocia, Turkey. There he was educated by Carterius who probably also taught St John Chrysostom. His great friendship with St Basil the Great began there and remained in place all their lives – including a love of theology and a life dedicated to the praise of Christ. Both were to become Fathers of the Church.

The saint’s greatest legacy is the passing on of the Christian message, not just to his pupil St Jerome, but all Christians. One recipient is Pope Francis who also passed on the message of the joy of Christ to the faithful in his visit in 2014 at the Holy Spirit Cathedral, Istanbul, Turkey. 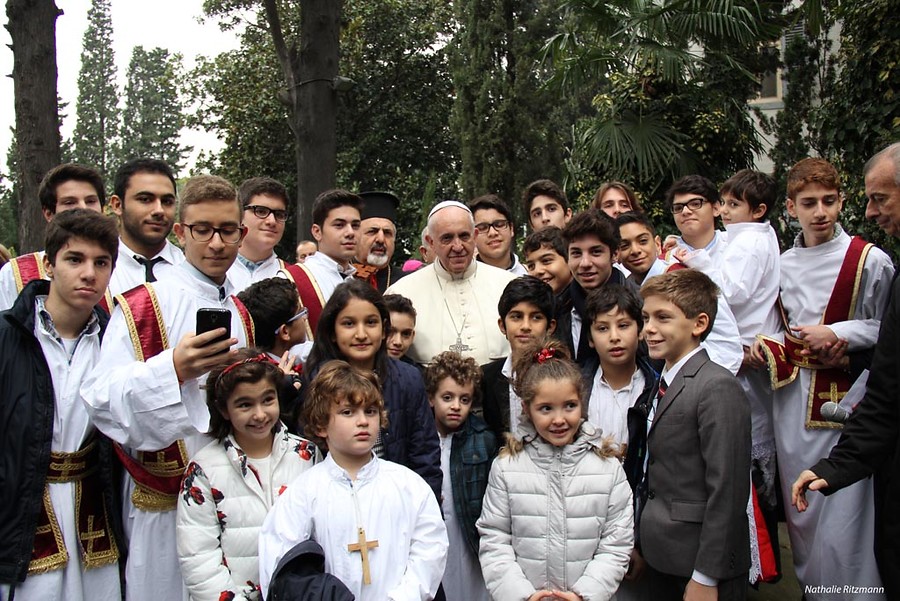 Pope Francis on the forecourt of the Holy Spirit Cathedral, Istanbul with young Catholics in 2014

Thanks to the saint’s efforts to sustain the Church at this most difficult time in the 4th century, Christians today are able to take inspiration and comfort from the example of his resolve. Catholics today are able to continue to celebrate their Catholic Faith with help from the Holy Spirit.

Despite of all his efforts for the Church, St Gregory Nazianzen’s final years ended with a retirement of obscurity. The saint’s willingness to endure these hardships was his gift to Christ.

Without doubt he was inspired by the verses: “Do all things without grumbling or questioning, that you may be blameless and innocent, children of God without blemish in the midst of a crooked and perverse generation, among whom you shine as lights in the world, holding fast the word of life, so that in the day of Christ I may be proud that I did not run in vain or labour in vain.”