THE call to forgiveness – peace on earth – this Christmas lies at the heart of the renewal of a Catholic school abandoned during Syria’s civil war, according to one of the Sisters there.

Sister Jihanne Attalah, from the Sisters of Sainte Jeanne Antide, who run Al-Riaya School, in Damascus, told Catholic charity Aid to the Church in Need (ACN) that key to their recovery has been to move on from the hurt caused when the site became part of the front line during the conflict.

When staff and students were evacuated, ACN provided school desks and other essential materials to enable the school to re-open in different premises in the centre of the Syrian capital.

The charity also funded a de-salination system for the school whose students have now gone back to their original site which has been rebuilt. 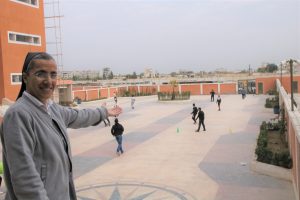 Highlighting the pain and anguish suffered by all those at Al-Riaya School, Sister Jihanne told ACN: “We lost a young teacher and a student, not to mention all those who were injured.”

She described the anguish of having to “abandon our large, recently built and beautiful school on the road to the Damascus airport”.

But the Sister added: “Amidst all this darkness, there has always been room for hope that guided us and helped us lift our eyes [and] overcome our desire for vengeance and transform ourselves.”

She said they all were inspired by a 15-year-old student called Christine, who lost a foot when a bomb exploded as she was walking home with a classmate.

Speaking from her hospital bed, Christine told a television news crew: “May the Lord forgive them. That is all I can say.”

Sister Jihanne said: “It was our faith in God and in the presence of the Virgin Mary who remained close to the Cross. She held firm and drew strength from her son.”

With conflict continuing and economic collapse reportedly putting 90 percent of the country below the poverty line, Syria remains a priority country for ACN.

Last week, the charity announced a package of aid providing warm clothing to 30,000 children across Syria.

In Aleppo, a further 1,500 youngsters will join with elderly guests for Christmas celebrations – a Nativity play and a festive lunch.