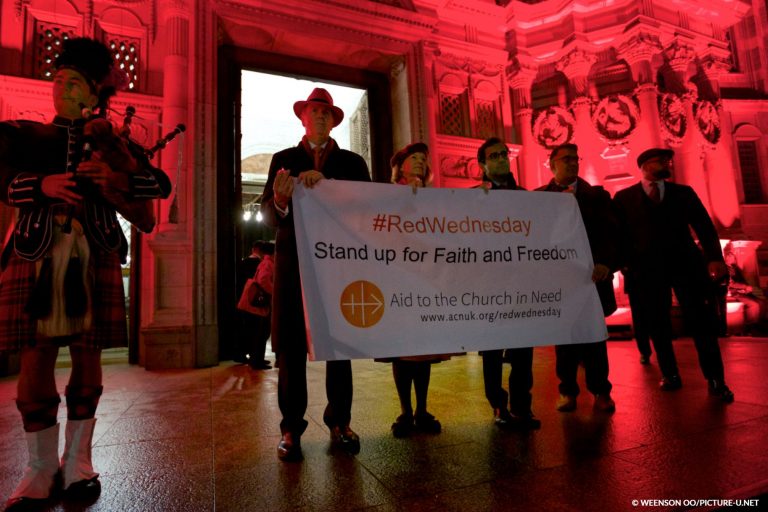 Across the UK, public buildings – including government offices – and other landmarks went red yesterday (27th November) to raise awareness for the persecution of Christians and other faith groups as part of #RedWednesday.

The Foreign and Commonwealth Office (FCO), Lambeth Palace, the Home Office, and others, went red as part of the campaign organised by Catholic charity Aid to the Church in Need.

The UK government backed #RedWednesday, following the recommendations of the Bishop of Truro’s review into FCO support for persecuted Christians.

At an event at the FCO, Rehman Chishti, the Prime Minister’s Special Envoy for Freedom of Religion or Belief, underlined political support for those suffering for their faith.

Mr Chishti said: “The Prime Minister has made it very clear that the UK government will take seriously the issues of religious freedom.

Neville Kyrke-Smith told faith leaders from Jewish, Muslim, Hindu and Christian communities, and parliamentarians, that the next government must be held to account regarding the recommendations of the Truro Review.

He said: “We will need to challenge the new government to follow up on these promises and the report which was backed in parliament.”

Frank Marooki fled his hometown of Qaraqosh, Iraq, in 2014 at the age of eight following Daesh’s invasion.

He said: “When they came it was the morning. There were explosives thrown around and the windows would shake. My parents said it was not safe and we had to leave.

“We had to take a boat to cross the sea [from Turkey] to get to Greece. There were big waves, there were a lot of people. The boat flipped over and everyone drowned.

“It was late at night. All I remember is screaming.”

Frank’s mother, father, brother and sister all died when their boat capsized.

Following the event at the FCO, Mr Chishti led a candlelit Cross procession with hundreds of people from Parliament Square to Westminster Cathedral for a service.

During the liturgy, Edwin Shuker, Vice President of the Board of Deputies of British Jews, who had to leave Baghdad when he was a child due to religious bigotry, expressed the necessity for freedom of religion for all minority groups.

He said: “History teaches us that what starts with an attack on one faith never stops there. Once the Jews were made to leave Iraq, all the other faith groups had to too.”