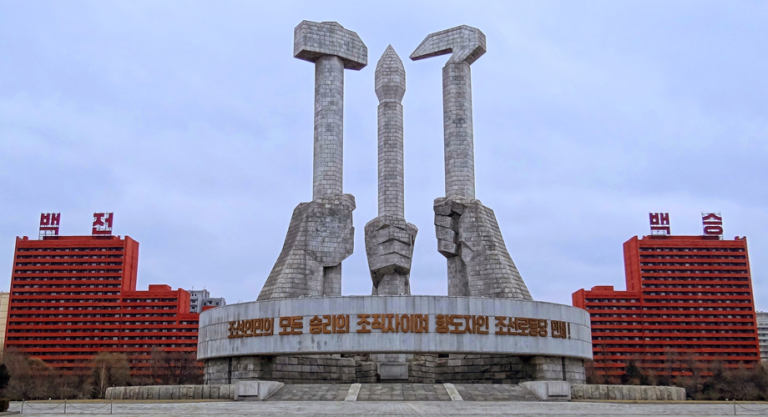 The tragic death of American student Otto Warmbier in June 2017 once again shone a light on the barbaric conditions experienced in the country’s prison camps. He was sentenced to 15 years’ hard labour in January 2016 for a prank in which he stole a political banner from the hotel where he was staying. Notably, throughout his trial, the official narrative of his crime stressed Christianity – even though Mr Warmbier was actually Jewish, a fact the authorities did nοt know or chose not to mention. Mr Warmbier, the state claimed, had taken the banner at the prompting of a friend from the Friendship United Methodist Church – a narrative which Mr Warmbier himself repeated on state television. The narrative of Mr Warmbier’s crime given by the state throughout the proceedings chimes with how Christianity is often viewed. The religion is frequently presented as a tool of ‘foreign intervention’ (usually by the US and/or South Korea), which poses a dangerous security threat. One former North Korean security agent told NGO Christian Solidarity Worldwide that Christianity is “persecuted because basically, it is related to the United States…and is considered spying. Since Americans conveyed Christianity and since they are the ones who attempted to invade our country, those who are Christians are spies. Spies are executed.” This analysis may run the risk of oversimplifying the way Christianity is viewed, but it does at least provide some insight into how the religion is seen as a threat because of its perceived links with the US.

At least 200,000 Christians have gone missing since 1953. Reports from the Database Center for North Korean Human Rights indicated that more than 65,000 people have been persecuted because of their beliefs. There are no exact figures about the number of Christians in the country today, and given the secrecy in which many are forced to practise their faith, verifiable figures would be almost impossible to obtain. In 2001, North Korea claimed that there were 38,000 religious believers: 10,000 Protestants, 3,000 Catholics, 10,000 Buddhists, and 15,000 Cheondoists (followers of a syncretic belief system largely based on Confucianism). But the real numbers are almost certainly much higher. One estimate puts the number of Christians as high as 400,000-500,000.

According to North Korea’s ‘Songbun’ social stratification system, Christians are classified as ‘hostile’ – those in higher categories being classified as belonging to the loyal ‘core’ class and those lower down labelled as ‘hostile’ to the state. Protestants are number 37 on the list and Catholics are number 39 out of a total of 51 possible categories. ‘Songbun’ categorises people according to their loyalty to the regime, and determines access to necessities such as food, education and health care. If caught by the regime, Christians face arrest and torture, and there are reports of the public execution of Christians. Defectors have described violence and intimidation of Christians and how Christians meet sometimes in groups of only two or three, silently mouthing prayers and hymns.

Officially, North Korea’s constitution provides for “freedom of religious belief” and in 1988 the government set up religious federations for Buddhists, Cheondoists, Protestants and Catholics, on a similar model to the patriotic associations in China. The federations oversee a Catholic church and two Protestant churches in Pyongyang – but these are widely seen as show churches for the benefit of foreign visitors. Father Philippe Blot, who works in China with North Korean refugees, described the churches as “just facades” designed to present a “sham religious liberty”. The Protestant churches are lay led. The Catholic diocese of Pyongyang is vacant and the last bishop was appointed in March 1944. There are no native Catholic clerics in North Korea, but visiting priests occasionally say Mass. In 2008 Father Paul Kim Kwon-soon, a South Korean Franciscan, became the first priest to be granted a residency permit.

Michael Kirby, chief commissioner of the 2014 UN Commission of Inquiry report, which found the regime guilty of crimes against humanity, said that the section on religious persecution has been one of its most overlooked parts. The report states that “Christians are prohibited from practising their religion and are persecuted”, and concluded that – despite the regime’s claims – there was no right to religious freedom. It also stated that worship of the Kim family is mandatory with pictures of them in every home, office and public building, and that those arrested because of their religious faith are frequently tortured, sent to prison camps, and even killed. Christians were routinely sent to Kwalliso camps – for political prisoners – where conditions were substantially worse than normal prison camps. There they have undergone “unspeakable atrocities” including extra-judicial killings, forced labour, torture, persecution, starvation, rape, forced abortion and sexual violence. According to Christian Solidarity Worldwide, “Documented incidents against Christians include being hung on a cross over a fire, crushed under a steamroller, herded off bridges, and trampled underfoot.” One estimate suggests that three quarters of Christians in the camps die from the harsh punishments they have meted out to them. Kim’s regime has denied that the camps exist, but human rights groups have produced survivor testimony and satellite images of the camps. Most recently, in November 2016, Human Rights in North Korea released images of Camp 25, near Chongjin, on the north-east coast, which it claims has doubled in size over the last decade or so. It is estimated that between 50,000 and 70,000 Christians are being held in these camps – which could account for around 50 percent of those being held there.

Such a dismal human rights’ record explains why North Korea is – with good reason – the country with the worst infringements regarding religious liberty. Lord David Alton, co-chair of the UK All-Party Parliamentary Working Group on North Korea, who has travelled to the country on numerous occasions, said in a June 2017 interview with Aid to the Church in Need, “Things in North Korea certainly aren’t getting better for Christians.” At a time when relations between Pyongyang and the West have declined, with potentially deadly repercussions, the likelihood is that North Korea’s Christians, who, in the mind of the regime, are so closely identified with the US and other such countries, can expect even worse treatment in the months and years ahead.

December 2015: Pastor Lim Hyeon-soo was sentenced to life in prison with hard labour by North Korea’s Supreme Court. During the trial his prosecutors sought the death penalty. The Christian leader was accused of committing “state subversive plots and activities” and working with the US and South Korea “to lure and abduct DPRK citizens” according to the state’s Korea Central News Agency. The Korean-Canadian, of Light Korean Presbyterian Church, Mississauga, Ontario, was arrested in February and in July appeared at a news conference, confessing his intent to overthrow the regime.

January 2016: Pastor Kim Dong Chul, 62, was publicly displayed on television as a prisoner of the state. He had been arrested in October 2015. Pastor Chul had been traveling to Rason, North Korea when he was arrested on the charge of spying for South Korea. The Korean-American Christian originally came from Fairfax, Virginia, before moving to Yanji in China, near the North Korean border.

May 2016: Christian missionary Kim Dong Chul was sentenced to 10 years hard labour for “unpardonable espionage”. The 62-year-old US citizen, who was born in South Korea, was accused of passing information, including military secrets, to his country of birth. Mr Dong Chul had been running a business in the special economic zone in the eastern city port of Rason. As is common in such cases a press conference was held, in March, during which he confessed to having received payments from South Korean intelligence officers introduced to him by US Intelligence. KCNA, the North Korean state news agency, reported: “The accused confessed to all crimes he had committed and gathered and offered information on… state and military affairs to the South Korean puppet regime, which are tantamount to state subversive plots and espionage.”

December 2016: Kim Jong-un reportedly declared 25th December as a national holiday – in honour of his grandmother Kim Jong-suk. It was believed that the move was calculated to deter celebrations of Christmas. Jong-suk, who was born on 24th December 1919, was the wife of North Korea’s first dictator Kim Il-sung, as well as being an anti-Japanese guerrilla and Communist activist.

December 2016: Canadian diplomats visited imprisoned Pastor Lim Hyeon-soo, whose health was reportedly declining. Lim told them he spends eight hours a day digging holes. Chantal Gagnon, a spokeswoman for Canadian Foreign Minister Stephane Dion, said: “We are still very concerned about his health, well-being and continued detention and are ‎working actively to secure his release. This case is absolutely a priority for us.”

March 2017: Father Philippe Blot, a French Catholic priest working with North Korean refugees in China, called on the Chinese government to welcome those fleeing North Korea, saying conditions for Christians have worsened under Kim Jong-un. He told Le Monde: “The 200,000 North Koreans now in China shouldn’t be forcibly repatriated. They all know they’ll be tortured, sent to camps and killed if this happens.”

May 2017: Christian man Kim Hak-song, a US citizen who teaches at Pyongyang University of Science and Technology, was arrested on Saturday 6th May. Another Christian and American citizen, Kim Sang-duk, who also taught at the institute, was detained at Pyongyang Airport as he tried to leave the country. They were charged with “hostile” acts against the North Korean government. The university is largely funded by Evangelical Christians, and was founded by South Korean-born US citizen Kim Chin Kyung in 2001. Himself a Christian, Kim Chin Kyung was a political prisoner under Kim Jong-il in 1998, but it is conjectural whether the institute’s Christian ethos played any role in these events. A spokesperson for Pyongyang University of Science and Technology stated that the recent arrests were not related to activities at the institute.

June 2017: A 21-year-old American student, Otto Warmbier, from the University of Virginia, died after more than a year’s detention in North Korea. He was returned to his family in the US on 13th June in a state of “unresponsive wakefulness”, having suffered “severe neurological injury”. North Korean authorities claimed his condition was caused by the combination of a botulism infection and sleeping medication, but medical tests carried out in the US found no evidence of botulism. He died of severe brain damage six days later in a Cincinnati hospital. According to his parents, his death resulted from “the awful torturous mistreatment our son received at the hands of the North Koreans”. Mr Warmbier was arrested on 22nd January 2016 after removing a political banner in the hotel where he was staying. He was sentenced by the Supreme People’s Court for “hostile acts” against the state and “theft of material of national propaganda”. Although Otto Warmbier was Jewish, the narrative that was presented during his “confession” on national TV was that he had stolen the banner at the prompting of a friend from the Friendship United Methodist Church in Wyoming, Ohio, who had agreed to give him a used car worth $10,000 in exchange for it. Mickey Bergman, who worked on negotiations for Mr Warmbier’s release, said that the family did not correct the impression that he was Christian which was given throughout the trial, “because they didn’t want to embarrass [North Korea] by explaining that he actually was Jewish”.