The earth shook. It was one of the most powerful earthquakes the province of Manabi, one the the poorest provinces in an already poor Ecuador, had ever experienced.

Just a few days later the country was mourning 800 dead and tens of thousands of wounded. There were shortages of food, water, medicines. 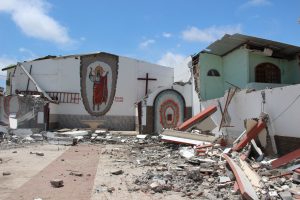 We should not even ask first where the money is going to come from. Archbishop Lorenzo Voltolini of Portoviejo a city whose old town now lies in ruins – sent out an appeal that sounds more like a prayer: “May the Lord of heaven and earth grant us hope again!” Mercy is a source of hope.