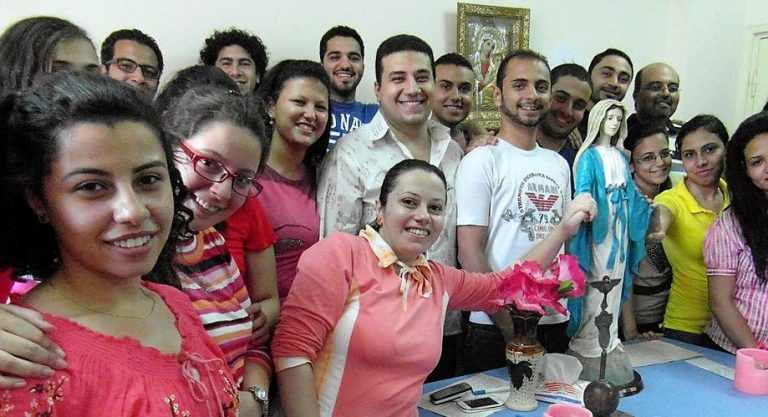 Egypt has always been deeply connected with the life of Jesus, notably the flight into Egypt which is a key event in the Bible. However, in recent years, the rise of Islamist extremists have led to a series of violent attacks against minority Christians.

In the midst of all this, it is truly remarkable to see the faith and courage of the 3,000 young Catholics who were supported by ACN in their five-day pilgrimage to Cairo during the Pope’s visit in April.

Fr Hani Kiroulos, vice president of the committee who led the youth pilgrimage at the time, said: “Many young people have a desire to participate in the huge event…”

Sadly, extremists often use acts of violence against young people as a way to break the hearts of their Christian parents. We heard the story of seventeen-year-old Heidi Salib, who was kidnapped in Cairo in an attempt to make her convert to Islam. She was drugged and her Coptic Cross tattooed on her wrist was forcibly removed. According to her parents, the local police and even their local MP took side with her kidnappers. Even though Heidi was eventually reunited with her family, she was traced and abducted again.

In spite of this, many young Christians are determined to remain in their country. Primary school teacher Nermeen, 23, from Holy Family, a large vibrant parish in Cairo, told us:

“We feel a strength together in Church. It is our home – part of our life here… We are happy to be Christians  and to be Egyptians…”

Over the last two years, Aid to the Church in Need, with your help, has supported the suffering Church in Egypt with nearly 150 projects including help for seminarians, construction, clinics, Mass stipends and transport for clergy. Please give whatever you can afford to help those enduring persecution at this time.