After two nightmare years, including forced marriage to a Boko Haram fighter, Rebecca finally escaped the extremists. Speaking in the local language Hausa, Rebecca described her ordeal to ACN. Fr Gideon Obasogie translated for us. When Islamist extremists attacked Baga, near Maiduguri, in August 2014, Rebecca and her family fled – but they made slow progress. She was pregnant and her husband was helping their children, carrying little Jonathan and leading three-year-old Zachariah by the hand.

With Boko Haram gaining on them, Rebecca begged her husband to leave them, telling him they kill men but only abduct women and children. Reluctantly he left, shortly before the terrorists caught up with her and the children.

They forced them on a 28-day trek to the Boko Haram base. Fr Gideon told ACN: “Due to the stress of the journey she miscarried.” They had to wade through Lake Chad to get to the extremists’ camp. “Crossing the lake was an evil journey, with water coming up to her neck.”

Rebecca was sold to a Boko Haram fighter and forced to marry him – but she refused to sleep with him to have a child. “I did not give in to him; most nights when he wanted to touch me I got the faeces of my children to rub on my body… this had always kept him away from me although his boys would always beat me up ruthlessly.

“They made me dig a hole for three weeks till I hit the water level. They flogged me – 98 strokes every day. I took ill for two weeks.”

As a punishment for her refusal, they threw her youngest son Jonathan, who was now three, into Lake Chad, where she presumes he drowned. They also interred her in a pit. “When she came out of the pit after almost four days, she was very weak and the Boko Haram man forced himself upon her and made her pregnant.”

In the depths of despair she intended to take an overdose of paracetamol to kill herself. “Then a woman, a wife of a Pastor, who was abducted from Gwoza, pleaded with me not to kill myself for the pregnancy. She had already two children from Boko Haram.” After enduring a problematic birth, her Boko Haram husband – although pleased that she had given birth to a boy – planned to sell Rebecca to another man.

She managed to escape when the Boko Haram fighters left the camp to carry out raids, as usual leaving the wife of the most senior terrorist in charge. “She got the permission of this woman to go to a neighbouring village, also under the control of Boko Haram to visit her cousin and she made a diversion. She walked for over three weeks, tracing her way to Maidugiuri. It’s a vast forest. She got lost in the forest and just kept moving.” Her son Zachariah had to be carried after fainting on their trek.

Rebecca, Zachariah and the new baby eventually arrived in Diffa, Niger and the army ferried them to Maiduguri. But when she arrived she found that her husband had given her up for dead and was preparing to marry a new wife. He called off the wedding, but found the situation difficult to deal with – especially the new baby.

He said: “Seeing my wife with a son from a Boko Haram father frightened me a lot. I was very happy seeing my wife but the child makes my heart break. May God make me love him.” 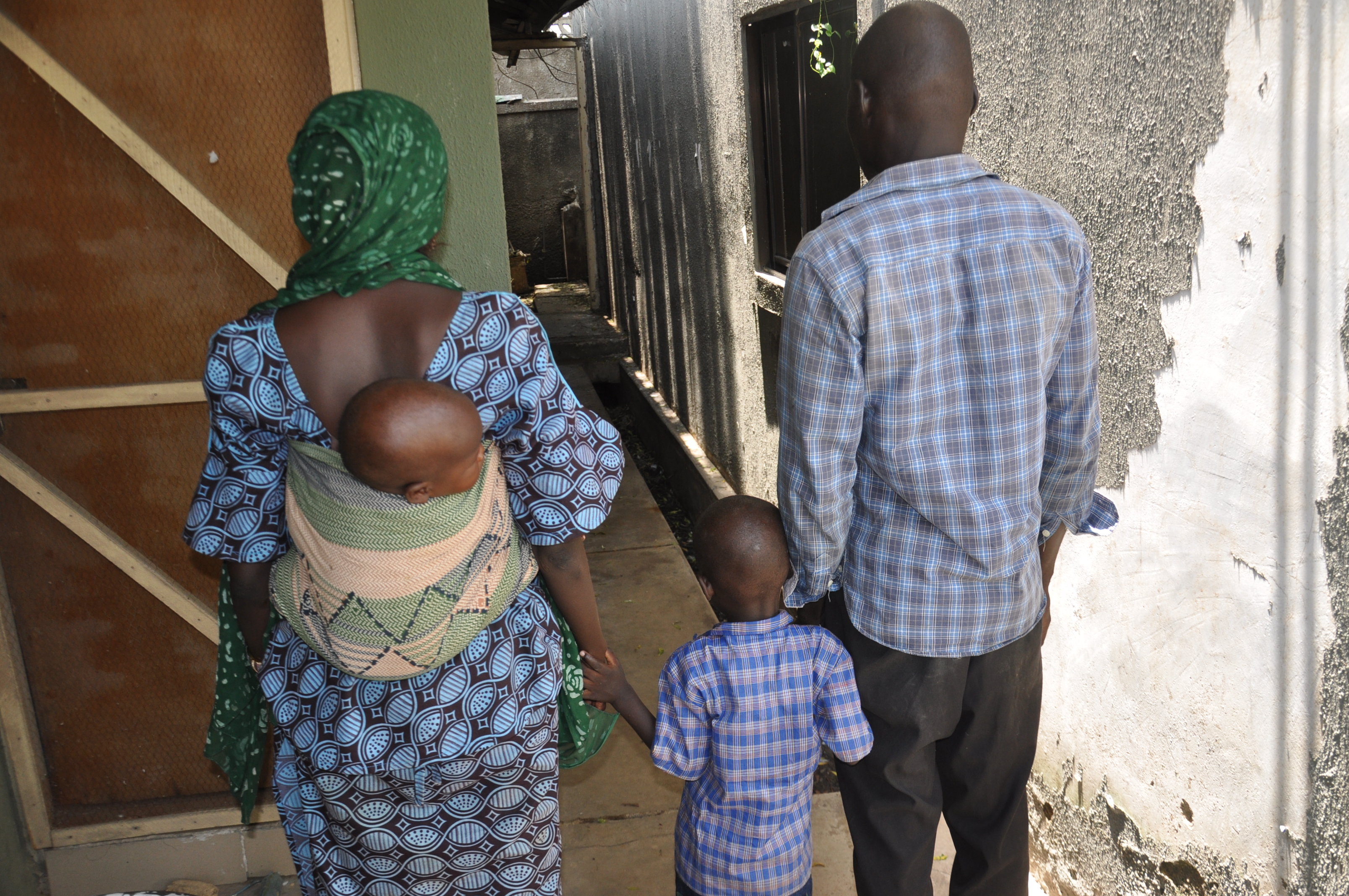 Rebecca and her family – they asked us not to show their faces.

Fr Gideon said: “He has been of a large heart to welcome both his wife and the children, particularly Christopher.” The baby was called Ibrahim in the extremists’ camp, but Rebecca had him baptised as Christopher. “I told him that whatever he does to this child he does to Jesus Christ, if he shows love to this child – then he shows to Jesus Christ.”

The family are being cared for by the Church in Maiduguri Diocese along with 500 other internally displaced persons. Rebecca and her husband have renewed their marriage vows and, despite their problems, they are facing the future with hope.