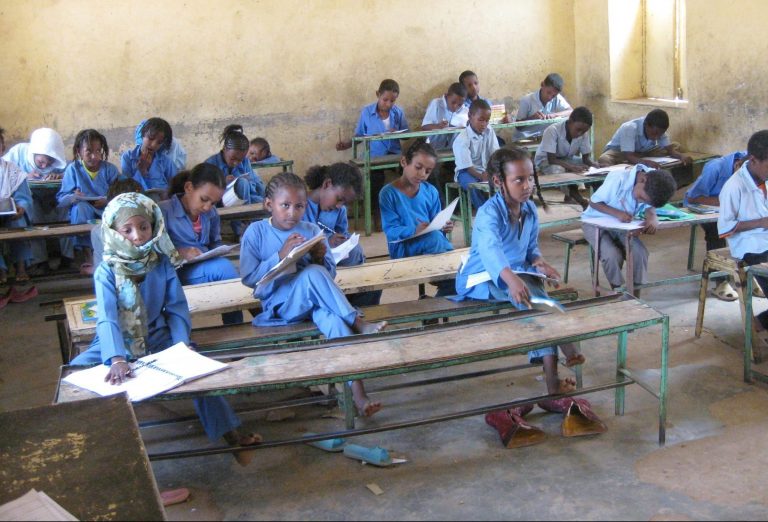 Sudan’s persecution against Christians has increased – with planning laws used as a pretext to destroy churches and Christian-owned buioldings in an attempt to crush Christianity.

In the past few years, there have been increasing reports of forced closure and demolition of churches, arrests of Christians accused of proselytism and so-called indecent or immoral dress, confiscation of Christian books and faith-related violence against individuals and groups. Severe human rights violations such as these emerged in a summer 2017 Aid to the Church in Need fact-finding and project-assessment trip to Sudan which highlighted the country’s increased determination to enforce Islamic Shari‘a law including floggings and lashings for transgressions against Muslim practices. These and other reports described Sudanese clergy being denied foreign travel, and school text books with hate speech about Christians and other non-Muslims. According to one leading religious freedom observatory, Sudan is one of the countries in which religious freedom seems to have “spiralled downward” during the period under review. Christians have been among the worst to suffer.

Problems concerning the rights of Christians have their roots in Sudan’s 2005 constitution. On the one hand the document upholds citizens’ right to freedom from “discrimination as to… religion” [Article 31] but on the other asserts the supremacy of Islam: Article 5(1) states that Sudan “shall have as its sources of legislation Islamic Shari’a” which restricts freedom of religion or belief. The constitution already foresaw the 2011 secession of South Sudan and, in the years since, Sudan’s President Omar Al-Bashir has set about creating a fully-fledged Islamic state, first conceived in 1989 when he seized power. By 2011, an exodus of Christians to the south was already underway, prompted by legislation withdrawing the citizenship rights of those with ancestry outside the borders of the re-dawn map of Sudan. The massive decline in the number of Christians in the north was only mitigated by virtue of a large number coming back to Sudan to avoid acute poverty and renewed violence that quickly beset so much of South Sudan. In February 2016, Auxiliary Bishop Daniel Adwok Kur of Khartoum highlighted the impact of the crisis in South Sudan on its northern neighbour with reports indicating that two million displaced people had crossed the border into Sudan.

They came back to a Sudan now subject to a strict Islamist agenda. In 2013 Lord Alton of Liverpool told the UK Parliament about new “systematic” persecution in Sudan. Religious freedom observers noted that in the 12 months up to February 2017 “at least 25 churches received notices that their churches would be demolished”. In May 2017 an anonymous source told ACN: “Churches are destroyed but it’s claimed to be just town planning. The Church is not allowed to buy property.” With so many churches due to disappear, Middle East Concern noted “The authorities refuse to designate any plots to be used for church buildings claiming there is no need for church buildings.” A Sudan Church source told ACN: “Churches are being torn down each month; you never hear that about mosques.” The source noted that approval to build churches – even for the Christian communities registered by the government – is “practically never granted” and that the Church makes use of multi-purpose buildings.

Seeking to explain the demolition of churches, the regime has highlighted the declining Christian population since the secession of the south in 2011. In an ACN interview in June 2017, Archbishop Michael Didi, who recently replaced Cardinal Gabriel Zubeir Wako as Archbishop of Khartoum, said that the secession of the south had “massively” affected the life of the Church. He said: “Here in the north, there are very few native Christians. Of [our] 51 priests and deacons, only five are from the North.” He added: “Theoretically, they could even be expelled from the country.”

Reports suggest Church leaders are increasingly concerned about the regime’s intolerance. On 25th June 2015 Seema Ali Osman was arrested with 11 other Christian women for “indecent or immoral dress”; they were wearing trousers or skirts. The women, who were spotted leaving a Khartoum Baptist Church, were alleged to have broken Sudan’s penal code which states that “an obscene outfit…shall be punished with flogging which may not exceed 40 lashes or with a fine or both. Five of the group were later found guilty and fined.

At particular risk were non-registered church communities. Czech preacher Jan Jasek had been sentenced to life imprisonment – until he was pardoned by the President. He had been accused of spying but reports suggested his real crime was proselytism among Muslims.

Al-Bashir’s regime was accused of a thorough-going Islamising programme. One leading religious freedom observatory noted that the regime was “tolerat[ing] the use of humanitarian assistance to induce conversion to Islam… provid[ing] Muslims with preferential access to government employment and favoured treatment in court cases against non-Muslims. Under Sudanese labour laws, employers must “give Christian employees two hours off prior to 10 am on Sundays for religious purposes, [but] this does not occur in practice.”

Reports highlight the influence of extremist Muslims. The US State Department has continued to designate Sudan as a country of state-sponsored terrorism, noting the presence of “Daesh-linked terrorist groups”. However, the report added: “The United States and Sudan worked cooperatively in countering the threat posed by al-Qaida and Daesh in 2015, which included their use of transit and facilitation routes within the country.” Reports suggest that “Christians in Muslim areas are being targeted for kidnapping by al-Qaida in the Islamic ¬Maghreb [in north-west Africa].”

The US imposed sanctions on Sudan, noting its religious freedom and other human rights violations. On 31st January 2017 the US granted a strict six-month waiver permitting trade opportunities if humanitarian conditions – including increased religious liberties – were put in place by the regime. The implications of Sudan’s non-compliance were clear: “If the Sudanese government backtracks on this progress, sanctions will be re-imposed.”

October 2015: Local authorities destroyed the premises of the Lutheran Church of Sudan in Omdurman, quoting “lack of planning permission” – even though the church had been there since the 1990s.

March 2016: Czech citizen Petr Jasek was arrested and imprisoned after filming first-hand testimonies of Christian persecution in Sudan. On 29th January 2017, he was found guilty of espionage and sentenced to life imprisonment. Following negotiations with the Czech government, Mr Jasek was granted a presidential pardon by Omar Al-Bashir on 23rd February and released from Kober maximum security prison the following day.

April 2016: Coptic Orthodox priest Gabriel Anthony, from St Mary’s Church in Nyala, was kidnapped by gunmen near Atash displacement camp on 14th Aprl. It is widely thought that the kidnapping was for ransom, rather than for religious reasons. He was finally released on 25th May.

May 2016: Sudanese warplanes dropped parachute bombs on St Vincent Ferrer Catholic School in Nuba Mountains, injuring a teacher and damaging classrooms and a library. According to Nuba reports, 68 bombs have been dropped during the month of May just on Heiban County.

October 2016: Armed police led a party that seized the Evangelical Basic School in Madani, Al Jazirah state on 24th October. It followed two previous attempts by authorities to seize the school on 5th September and 4th October. Four staff members who tried to stop the property being seized on these earlier occasions were jailed for four days, including headmaster Rev Samuel Suleiman. Most teachers and students belonged to the Nuba ethnic group. Parents held a protest march over the move, which halted the education of more than 1,000 pupils aged 3 to 18.

February 2017: Christian leaders called on authorities to reconsider plans for the demolition of at least 25 church buildings in Khartoum State. At a press conference on 11th February, the Sudan Council of Churches denounced the proposed demolition of buildings belonging to a wide range of denominations. The churches, which are mostly in the Sharq al Neel (East Nile area) locality of Khartoum North, are allegedly built on land designated for other uses. Speaking at the press conference the chairman of the Sudan Council of Churches, Rev Mubarak Hamad noted that mosques located in the same area were not affected by the demolition order.

April 2017: Presbyterian elder Younan Abdulla, 28, was stabbed to death while protesting against the sale of church land at the Evangelical Presbyterian Church’s school in Omdurman, Sudan. A group including police officers broke into the church and ransacked the living quarters of the compound’s guard. Police arrested the guard’s wife and three children.

May 2017: Authorities demolished the last church in the Soba Aradi district in the south-east of the Sudanese capital, Khartoum. Riot police and National Intelligence and Security Service officers prevented onlookers from taking photos or filming. This church was one of 27 churches fighting a joint case against a government decision to confiscate and demolish their buildings. Lord Alton and Middle East Concern reported that the Sudanese Church of Christ church in Soba Al Aradi and a building belonging to the denomination in Algadisia, Khartoum had both been demolished.

May 2017: The USCIRF argued that US sanctions against Sudan should be reintroduced due to continuing human rights violations against Christian groups. USCIRF’s newly appointed chairman Daniel Mark stated that “USCIRF believes that these sanctions should remain in place. Sudan has not shown sufficient progress on allowing greater religious freedom. Religious leaders continue to be arrested and convicted on spurious charges; churches have been demolished; and a range of laws against apostasy, blasphemy, and undefined ‘offences of honor’ remain in force.” Following a six-month waiver granting a limited lifting of sanctions under the US Executive Order in January, the USCIRF suggest that the US should resume sanctions against Sudan. In a letter to the Secretary of State, the USCIRF wrote: “Since South Sudan’s secession in 2011, USCIRF has documented a deterioration of religious freedom conditions year after year. During this period, the Sudanese government has arrested nearly 200 Christians, including 14 religious leaders. Of these detentions, three pastors were prosecuted on spurious capital charges, including waging war against the state and espionage.” The letter continues: “Sudanese authorities also have demolished or partially demolished approximately 20 churches and church buildings; expropriated or threatened to expropriate at least 10 others; and have stated that they would no longer issue permits for new church construction.” The State Department has designated Sudan as a CPC [Country of Particular Concern] since 1999, most recently renewing the status in October 2016.