A 13-year-old Christian, who held her dying father in her arms moments after a Cairo suicide bomb attack by Daesh (ISIS), has spoken about her heart-breaking experience.

Marian Nabil Habib told Catholic charity Aid to the Church in Need about the “martyrdom” of her father, Nabil Habib, who was among 29 people killed by Daesh extremists in the capital on 11th December 2016. 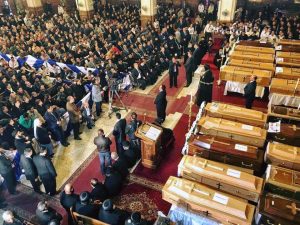 Describing her last moments with her father, she said: “I took off my jacket for his head to rest on. There were wounds across his entire body. His hand looked shattered, my hair got wet with his blood.

“He was still alive and, looking me in the eyes, he told me to take care of my younger sister and brother and he gave me the keys to the church gate and to our apartment.

“I will always remember his smile right before he died.”

The 15-year-old teenager recalled feeling panic and confusion immediately after the explosion, Miss Habib said: “I rushed outside and found people running in all directions, screaming hysterically.

“There was a scene of complete destruction, but I still I did not know what had happened.

“I asked about my father but nobody knew where he was. I continued looking for him, then, at the entrance of the church, I found my father lying on the ground and bleeding heavily from his head.”

Telling ACN about the events that led to the weekend attack, she said: “That Saturday evening, the suicide bomber had come to the church and asked dad about religious books, saying that he wanted to know more about Christianity, a deacon overheard the conversation and told the young man to come back the next morning at 10am.”

“On Sunday morning, as soon as my father saw the young man he recognised him, the bomber was quickly making his way to the women’s pews, looking confused.

“My father got on the phone with my uncle to tell him about the man, but quickly ended the call to give chase. Next, the suicide bomber blew himself up.”

Her faith and the support of the Church helped her

Miss Habib described how her faith and the support of Church members had helped during her mourning.

She said: “Losing my dad put me in a state of shock for more than a month and a psychiatrist visited me. “Finally, it was God’s mercy, his consolation, which helped me recover.

“I feel great comfort from God and I also got support from the Church, my friends, and many people around us… people from other countries and international bodies.”

Talking about the impact of her 48-years-old father’s violent death, she said: “I do not feel scared now, but I still long for my father and my little brother needs his hugs, we miss him very much.

“I do not want to leave my country and the place where my father served and lived his whole life. All my memories of my father are here.

“Despite the pain, my life has changed for better. I feel stronger than before and I care more about my studies than ever before – the future no longer frightens me.

“I have joined the church choir, which gives me inner peace, because it is one of the things that bring me closer to God.”

Referring to this new viewpoint in her life, she said: “My message to all those who suffer, and who might read my words – do not be afraid.

“God is great and I ask everyone to pray for all people facing violence and hatred; we must pray for peace around the world.” 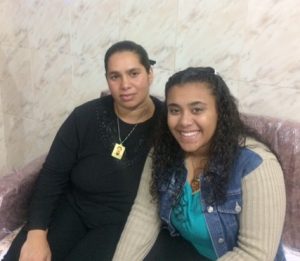 Marian Nabil Habib (15) and her mother, Mariam Salah in Egypt (© Aid to the Church in Need)

She added: “That day was a watershed in my life and the life of my family… I will never forget the details of that day.”

ACN supported the Church in Egypt with a total of 47 projects in 2017 including programmes for young Catholics as well as the formation of seminarians and priests.