A senior Church figure in Central African Republic (CAR) denounced Islamists who killed up to 40 people in August – as well as decrying the UN failure to act against the extremists.

Catholic charity Aid to the Church in Need spoke with Bishop Juan José Aguirre of Bangassou after jihadists slit the throats of about 40 people at a mission station in Gambo.

“the suffering is great. We only have the solace of God and, when He does not speak, the Silence of God.”

Talking about the events in the Gambo, Bishop Aquirre said: “They reported that half the village has been burned down, the church was looted and set on fire. Reconstruction will be very difficult. But we know that it will happen, that with God’s help we will find the ways and means to rebuild everything.” Describing how displaced families have fled to neighbouring Congo, he said: “They will return, but they will have to start from the beginning again because they will find their fields bare and their houses destroyed… the suffering is great. We only have the solace of God and, when He does not speak, the Silence of God.”

He added that the Church had “acted as a human shield” protecting 2,100 Muslims from reprisal attacks by “non-Muslims, followers of traditional religions and non-Christian sects”. Bishop Aguirre said: “We had to protect the Muslims, including many women and children… We took them to the seminary of the diocese, where they are still living almost two months later.” Amid other security concerns he noted CAR’s national army “are complaining that they don’t have any weapons. But weapons are being smuggled into the country via Chad, South Sudan and the Congo.”

“arms deals that are controlled by multinational corporations”

The bishop said: “Many are getting rich from arms deals that are controlled by multinational corporations. They create so-called low-intensity conflicts to enrich themselves.”

Describing the financing of extremism in the poorest African country he referred to Islamist group Séléka as “funded by oil countries and supported by the president of Chad.” He outlined militant violence across the country over the last four years and the response by the authorities including MINUSCA (United Nations Multidimensional Integrated Stabilization Mission in the Central African Republic), a peacekeeping presence comprising of police, soldiers and other personal from more than 125 countries. He said: “They [Séléka] occupied half of the country. These jihadists completely disrupted the country. Four years later, neither the government nor the administration nor the MINUSCA have taken any steps to expel the Séléka from the country.” Condemning the UN’s response to Séléka, he added: “the UN soldiers even cooperated with them.”

Speaking of the rise of CAR’s Anti-balaka militia in response to the Islamist militants, he said: “Now many young people have taken up arms to fight against the Séléka.” Anti-balaka is formed of non-Muslim faiths groups such as Christians and animists. Bishop Aguirre spoke of incidents at other mission stations: “They [Anti-balaka] reacted to a massacre carried out by Séléka, during which the throats of many non-Muslims were slit. The last thing we heard was that many of the corpses have yet to be buried one week later.” Bishop Aguirre said that “the people are very dissatisfied with the Moroccan soldiers of the MINUSCA who are supposed to be UN peace troops.” Media reports state that MINUSCA are all Muslims from Morocco and according to the UN, Anti-balaka fighters killed nine MINUSCA members in May and July. 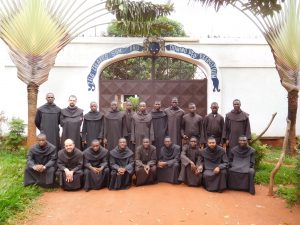 ACN is supporting the Church’s work in CAR, with emergency aid in Alindao Diocese as well as helping the formation of young Carmelite friars in Bangui diocese and the education of children in St Joseph Reception Centre, Bouar Diocese.