A Catholic charity’s fact-finding and project-assessment trip to a remote corner of Africa – the first of its kind in a generation – has revealed the urgent pastoral needs of extremely poor communities living in one of the world’s largest rain forests.

Church leaders in Congo-Brazzaville (Republic of Congo) highlighted a lack of boats needed in the north of the country – home to the second largest rain forest after the Amazon – where marine transport is the best means of accessing an area with high rainfall and many rivers.

Repair of churches and convents, books on Christianity and support for seminarians also emerged as priorities during the trip to Congo-Brazzaville by Aid to the Church in Need, the charity which supports suffering Christians in more than 140 countries around the world.

In an interview after her visit to Congo-Brazzaville, ACN’s Africa projects coordinator Kinga von Poschinger said: “The last time ACN visited the country was in 2002.

“So, with this visit and the new projects we are proposing to fund, we are hoping to give new impetus to the Church here and to Congolese society.”

Stressing the challenges of pastoral work in the rain forests in the north of the country, she said: “Many of the houses here are simply mud huts.

“…the exuberant forest vegetation makes it very difficult to get about, except by boat – or occasionally by car when the road conditions allow it.” 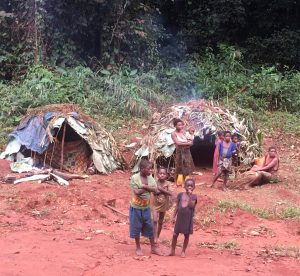 Congolese families outside their homes (© Aid to the Church in Need)

She compared the rural north of the country with the oil-rich south, highlighting how poverty was increasingly widespread, especially with the fall in oil prices.

Referring to the south’s “extensive oil reserves”, she said: “…the fall in world prices, combined with corruption, has plunged the country into a profound economic crisis that has profound consequences for everyone.”

In a country which is up to 35 percent Catholic, Kinga von Poschinger said that faith practice had suffered at the hands of Congo-Brazzaville’s long exposure to Communist government and the growth of Pentecostal sects, masonry and traditional religions.

“Congolese Catholics have a very living and joyful faith”

She said: “[The bishop] is filled with energy in his desire to help his people move forward and overcome – little by little – the problems they face.

“He goes out into the streets himself to talk with the people and he organises a regular ‘Week of Evangelisation’ that inspires thousands of people to come and listen to him.”

Kinga von Poschinger said the Church was growing, adding that two of the country’s dioceses were only created in 2013 with more expected to be created in the next few years.

Describing a Mass involving three newly ordained young priests, she said: “The happiness and the pride of the people in their three new priests – despite their many sufferings – were most impressive.” 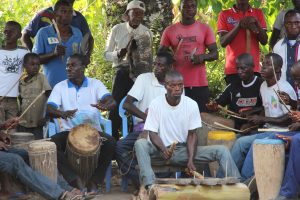 Drummers at traditional dancing ceremony, organized in Epéna as special moment after the first Mass of three newly ordained priests in the diocese of Impfondo.

Stressing Bishop Manamika Bafouakouahou’s emphasis on silent prayer, she went on: “Congolese Catholics have a very living and joyful faith and tend to be somewhat calmer in their forms of worship.” 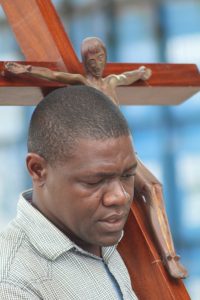 The ACN projects officer stressed the strain on priests caused by rural isolation and physical hardship.

She said: “The fact that many of the priests feel very much alone [mean they] can sometimes lose their sense of vocation and mission.”

“That is why ACN wants to help with spiritual retreats and other projects aimed at the formation of priests and religious in order to renew their strength and provide the example they need.”