The international community is profiting from a humanitarian crisis sweeping the Democratic Republic of Congo (DRC), according to a senior cleric, who accuses the West of deliberate inaction in the face of extreme violence in the country.

Father Apollinaire Cikongo, executive secretary of the Catholic Bishops’ Conference of Kananga, which covers part of the DRC, told Catholic charity Aid to the Church in Need about widespread exploitation in the country and that Western powers are guilty of “a conspiracy of silence that is very profitable economically”.

“the most murderous war since the Second World War”

Describing the violence in the DRC as having domestic and global causes, he said: “[We] are still living through a silent war, the most murderous war since the Second World War.

“But, instead of bombing campaigns, we have to face the bombs and bullets of the army and the police, of the rebel militias and foreign troops.”

Saying that the DRC was still suffering from the West’s “legacy of disdain and indifference”, Father Cikongo said: “And to this we have to add economic interests of Western powers and their regional representatives which have for decades been playing a pernicious role in the conflict.”

He added: “But we will be praying… for the conversion of those responsible – both within and outside the country – for these misfortunes.” 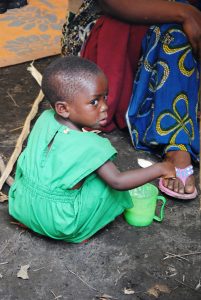 IDP children in Goma, DRC (© Aid to the Church in Need)

Father Cikongo said Pope Francis and others in the Church had raised awareness of DRC’s plight but that most of the world’s media were silent.

He said: “The world knows well what is going on here but, since our sufferings are serving the material interests of other nations, there is a deliberate intellectual and media silence on the part of the major powers.”

The priest added: “But in this world dominated by the mass media [Pope Francis’] voice is not enough to wake up a world faced with a conspiracy of silence that is very profitable economically.”

“crisis in the government of the country”

He said that political instability had resulted from the DRC’s President Joseph Kabila ignoring the legal expiry of his term of office – the end of 2017.

The Kasayi region in the south of the country is among the areas worst affected by increased clashes over the past year between armed militias and the army.

Father Cikongo said: “[There is a] crisis in the government of the country and the various resulting outbreaks of violence with their dire impact on the economy.”

He added: “[T]here is no security, and people’s fundamental civil and political rights are simply being trampled underfoot.”

The UN World Food Programme last month described the situation in the DRC as a developing humanitarian catastrophe – with ACN noting a refugee crisis that is numerically worse there than in Iraq.

“The conditions regarding food supplies and healthcare are alarming, and access to basic services such as schooling, drinking water and electricity is worse.

“According to a study carried out by the bishops’ assembly of the Kasayi region, around 80 percent of the children there are suffering [from] chronic malnutrition.”

Father Cikongo is a professor at the major seminary in Malole, partially burnt by militia last February. 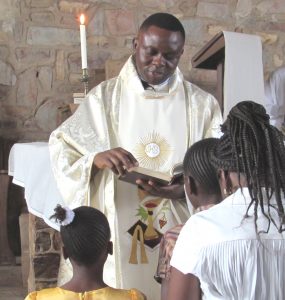 Father Apollinaire Cikongo (© Aid to the Church in Need)

In a message to ACN benefactors and others who helped repair it, he said: “Thanks to the generosity of so many Catholics, we were able to resume our courses on 16th June [2017], after being closed for four months.”

Father Cikongo added: “Despite the deep night we have been going through for decades, with all its darkness, God is not like a distant and absent pharaoh.

“We are suffering but we are able to endure because God suffers in us and nobody can overcome Him.”

The DRC is a priority for ACN aid and last year the charity supported 1,229 seminarians spread across 41 seminaries in the country.