Army and police in the Democratic Republic of Congo (DRC) stand accused of killing at least four people and injuring several others in attacks on more than 130 churches around the country.

In the latest incident on Friday (12th January), two people were injured when security forces reportedly fired tear gas at Kinshasa Cathedral after a Mass for lay people killed by military and police.

“After Mass, the army and police again fired tear gas”

In his statement, given to Catholic charity Aid to the Church in Need, he continued: “After this Mass, the army and police again fired tear gas and two people were injured.”

Church leaders have blamed DRC’s security forces for attacks over the New Year which took place at 134 churches and chapels in the capital and a number of provinces in the country.

Soldiers and police are accused of firing live ammunition as the faithful were coming out of Mass at St Dominic’s Church, Limete. 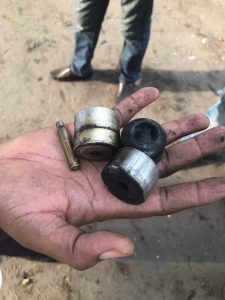 Accusing the DRC’s police and army of an unprovoked attack in the grounds of the church, St Dominic’s parochial vicar, Father Jean Nkongolo, said that when he asked them to stop shooting the parishioners, he was shot in the face by a rubber bullet and injured.

As well as rubber bullets security forces fired ‘stun’ projectiles and tear gas at the religious procession in the church’s grounds, reportedly almost killing a woman.

Four other parishioners were injured by rubber bullets during the attack.

Father Nkongolo’s account was relayed through Father Cikongo who said: “Every Sunday after Mass the parishioners go the Grotto of Our Lady within the church grounds to pray the Salve Regina prayer and get a blessing.

“Father Nkongolo said that it was at this moment the parishioners were attacked and shot with tear gas and rubber bullets by the security forces.”

Describing how Fr Nkongolo received his facial injury, Father Cikongo said: “Father Nkongolo went over to the police to tell them to stop because the people were innocent and had done nothing wrong.

“Father Nkongolo told me that it was at this moment, a policeman shot at him directly towards his eyes with a rubber bullet, but thanks be to God Fr Nkongolo reacted quickly and moved his head away from the attack.

“Otherwise he would have been hit in the eyes, but he was shot on the side of his face.”

“One lady was shot in the head with a live bullet”

Father Cikongo said that after the attack Father Nkongolo noticed the woman shot in the head, picked her up off the ground and carried her into the church.

Father Cikongo said: “This one lady was shot in the head with a live bullet. Fr Nkongolo said: ‘we thought at the time that she was dead but she had survived.’”

The woman was taken to hospital where latest reports describe her condition as stable. 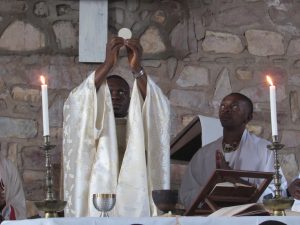 Father Cikongo said that after the Mass, the parish had decided against taking part in a peaceful march organised by lay faithful after the DRC’s President Joseph Kabila reneged on a deal to stand down and not serve a third term.

But now, after the attack at Kinshasa Cathedral, Father Cikongo said the lay faithful – the Lay Coordination Committee – have called for a peaceful demonstration on Sunday (21st January).