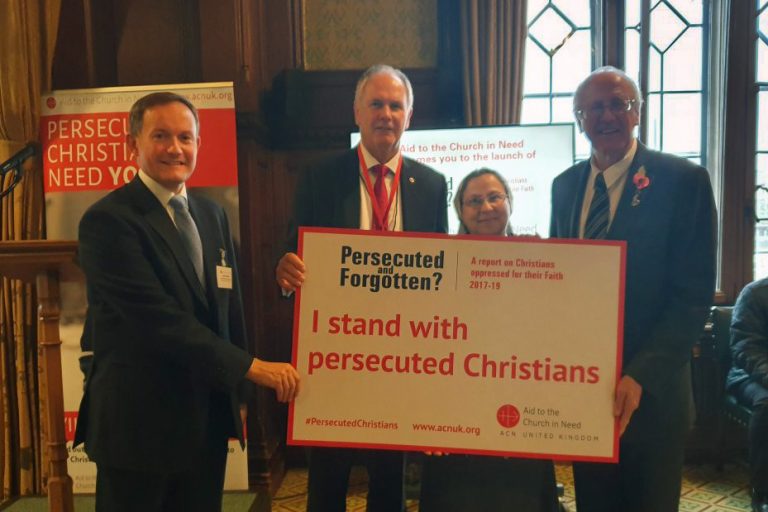 The countdown to Christianity’s disappearance in parts of the Middle East is ticking ever louder – and can only be stopped if the international community acts now – according to a new report launched in the Houses of Parliament today (Wednesday, 23rd October).

The 2019 Persecuted and Forgotten? report, produced by Catholic charity Aid to the Church in Need (ACN), warns of Christianity vanishing from towns and cities in the region, as – despite the defeat of Deash (ISIS) – the impact of genocide has led to haemorrhaging numbers of the faithful.

In Syria Christian numbers have fallen by two thirds since the conflict began in 2011.

The ACN report notes that the international community has shown unprecedented concern about the persecution of the region’s Christians, but failed to provide the aid required to ensure its survival during that period covered by the report (2017-19).

Persecuted and Forgotten? found that “Governments in the West and the UN failed to offer Christians in countries such as Iraq and Syria the emergency help they needed as genocide got underway.”

The report warns that the Church in the region could vanish if radical Islamists were to mount another attack on vulnerable communities – a threat highlighted by reports of jihadists escaping prison, as a result of this month’s renewed violence in north-east Syria.

The Persecuted and Forgotten? report concludes: “Were there to be another Daesh-style assault on the faithful, it could result in the Church’s disappearance.

“However, if security can be guaranteed there is every indication that Christianity could survive in Nineveh and Erbil.”

Persecuted and Forgotten? also found that the persecution of Christians has worsened the most in South and East Asia – noting that, in 2018, 477 anti-Christian incidents were reported in India.

In the same region, 300 people died – and more than 500 were injured – in Sri Lanka on Easter Sunday 2019 when jihadists bombed sites including three churches.

In a number of African countries Christians were threatened by Islamists seeking to eliminate the Church – either by use of force or by dishonest means, including bribing people to convert.

In Nigeria’s north and the ‘Middle Belt’ regions, militants continued a reign of terror against Christians and Muslims alike –3,731 Christians were reportedly killed in 2018.

While in other parts of the African continent, the main threat to Christians came from the state – over a 12-month period, more than 70 churches were attacked in Sudan’s Nuba Mountains with 32 burnt down.