A Christian woman has spoken of her heartbreak seeing Mosul’s desecrated churches – and remains fearful of Daesh (ISIS) collaborators in the city.

Nadia Younis Butti, who returned to Mosul, northern Iraq, for the first time since Daesh seized it in summer 2014, told Catholic charity Aid to the Church in Need that the city was still “extremely dangerous”.

Fearing Daesh sympathisers amid the Muslim community, she said: “A lot of Mosul’s inhabitants have worked together with Daesh-jihadists for three years, and some might have relatives or family members who were with Daesh.

“There are a lot of Sunnis, who often supported Daesh.” 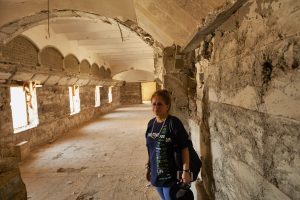 Nadia Butti, a Christian woman, at St. George’s Monastery, Mosul – destroyed by Daesh (© Jaco Klamer/Aid to the Church in Need)

She added: “The city was released by the Iraqi army, which is supported by many Iranian Shi‘a. In Mosul, they are met with a lot of distrust – they aren’t seen as allies.”

She said: “For me, the city has not become safe since the recapture of Mosul.”

Describing the situation in the city, Ms Butti said: “It is still extremely dangerous in Mosul. I just spoke to a police officer who lost a colleague this week, near St George’s Monastery. He was shot at night.”

“Daesh have robbed every church, demolished them”

Extremists are still seen as a threat by Christians. Jihadist graffiti on a wall of the devastated 17th century monastery states ‘Daesh will always remain in Iraq’.

The Islamist group also marked another wall with an arrow pointing towards Mecca so prayers could be recited five times a day.

The destruction has been extensive. The monastery’s dome is now tilted and floors, walls, and arches have been stripped of the marble panels.

Gravestones in the monastery cemetery have been smashed, the church’s altar destroyed and a 14th century statue beheaded.

Ms Butti also visited the damaged Church of the Holy Spirit, where church walls are marked with graffiti which reads ‘Long lives the caliphate’.

Since the church’s liberation in April last year, the ruins have provided shelter for four internally displaced families from Zummar, northern Iraq – each family lives in a separate room of the church.

Ms Butti said: “Now, Daesh have robbed every church, demolished them and covered them with texts.”

At her own place of worship, the Syriac Orthodox Church of Saint Ephraim, Ms Butti said: “I can’t believe my eyes when I see what Daesh has done to my church.

“I’m not sure my church will ever be fully restored… the reconstruction of this church will cost a lot of money and energy, and for whom are we rebuilding it? All the Christians have left Mosul.”

But seeing an image of Christ’s face, she added: “When I just looked up, I suddenly felt intense happiness. I saw that the blue dome with Jesus’s image had survived the occupation of Daesh reasonably well.

“And, although not much of its beauty has remained, this image shows how beautiful my church was.

“The jihadists have only been able to destroy the edges of the picture. Seeing Jesus above me, in this destroyed church, gave me great joy.”

ACN is supporting thousands of returning Christians to their towns and villages in the Nineveh Plains of northern Iraq, including the rebuilding of more than 780 families’ homes.