A newly ordinated  priest has described returning with the Blessed Sacrament to his home village in northern Iraq after it was finally liberated from Daesh (ISIS) extremists.

Father Martin Banni, who as a seminarian in August 2014 fled Karamlesh holding the Blessed Sacrament, reported to Aid to the Church in Need how he had just gone back to the village in the Nineveh Plains, carrying the Sacred Host.

Father Banni, who is in his mid-20s, described his joy at the home-coming to the village’s St Addai’s Church.

In a message to the Catholic charity’s John Pontifex, who met the young man in October 2014 after he had been displaced to Kurdish northern Iraq, Father Banni stated: “When we last spoke, I told you about how I was the last to leave Karamlesh in the Nineveh Plains with the Blessed Sacrament in my hands.

“Daesh were about to occupy our village – we were forced to leave.

“Now I wish to tell you about my return to Karamlesh – I was the first priest to bless the people in the church in my home village in northern Iraq.”

Speaking of the Nineveh Plains, which had been a centre of Christianity for 1,800 years, he added: “I told you I would stay in Iraq to serve my people and our Church. Now, I am delighted to be celebrating Holy Mass here in Iraq.”

Despite the threat of Daesh, he decided not to go to the USA where his family have settled, and instead stayed in St Peter’s Seminary in Erbil, the capital of Kurdistan, northern Iraq, where he completed his studies for the priesthood.

He admitted that he found leaving Karamlesh distressing.
As Daesh advanced on the village on the night of 6th August 2014, he was driven away at high speed. With him was St Addai’s parish priest Father Thabet. 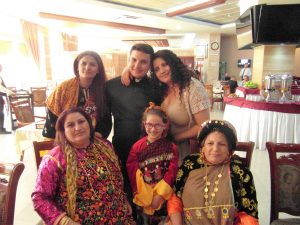 Fr Martin Banni and family including his sister Miriam celebrating his ordination in Ankawa, Erbil, Iraq (© Aid to the Church in Need)

Father Banni recalled the support of family and friends of all ages who came to his ordination to the priesthood last September.

Also present was Neville Kyrke-Smith, National Director of Aid to the Church in Need UK.

Acknowledging ongoing security concerns in Nineveh and massive bomb clearance and reconstruction costs, Mr Kyrke-Smith said: “I know from my meetings in northern Iraq how much a return to their homes would mean for these Christians who fled such appalling terror.”

An ACN survey of the displaced people showed 41 percent definitely wanted to go back, a figure which rises to 87 percent to include those willing to return subject to assurances over security and other core concerns.

Mr Kyrke-Smith said: “Some families have already returned to their homes but, with support, nine families out of every 10 would return to their homes if conditions were right and continue to help each other within their communities.”

He added: “It is vital that ACN assist the Christian community – to assist religious Sisters and priests so that they can guide their parishioners.

“ACN and others are being called upon to support Christians and priests like Father Martin in Iraq now – they are relying on us.”