A progress report on emergency aid dispatched at the height of the lockdown in Pakistan shows how it has provided a lifeline for more than 2,000 Christians threatened with starvation.

More than 500 families across Faisalabad in the Punjab province received food rations as part of a COVID-19 relief package from Aid to the Church in Need, the Catholic charity for persecuted and other suffering Christians. 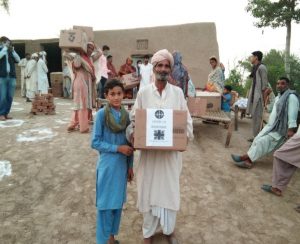 Amid reports that some local NGOs were refusing to give emergency provisions to non-Muslims, ACN’s project partners on the ground have distributed more than 70 percent of the aid to Christians, whose access to employment is mostly restricted to low-paid jobs.

The rest of the ACN aid has gone to other vulnerable groups.

The programmes have targeted the families of daily wage earners, rickshaw drivers, sanitary and brick-kiln workers and labourers who overnight lost their jobs when lockdown happened and who had no savings to fall back on.

Aneel Mushtaq, Executive Secretary Caritas Pakistan Faisalabad, which has partnered ACN in the project, told the charity: “This aid that you at ACN has given has helped save the people from starvation.

“Many of them had nothing to put on the table to feed their families and they were in a very scary situation.”

The food parcels were part of a raft of COVID-related ACN relief programmes for Faisalabad which included PPE such as face masks and sanitisers for all 46 priests across the diocese and more protective equipment for 100 catechists.

This aid has enabled clergy and lay people to minister to the faithful at a time of great need.

A COVID awareness campaign was also mounted, using local radio, as well as posters and leaflets for those without access to the internet and social media.

Faisalabad was one of three dioceses across Pakistan to benefit from a programme of ACN COVID aid helping more than 5,000 of the poorest families across the country.

In early April, the charity announced a €5 million (£4.5m) COVID fund and since then emergency and pastoral aid has gone out all over the world including to India, Syria and Brazil.

Mr Mushtaq said the needs in Pakistan remained acute with a partial lockdown still in place.

He added that Christians were among those suffering the worst as the country’s economic crisis deepens.