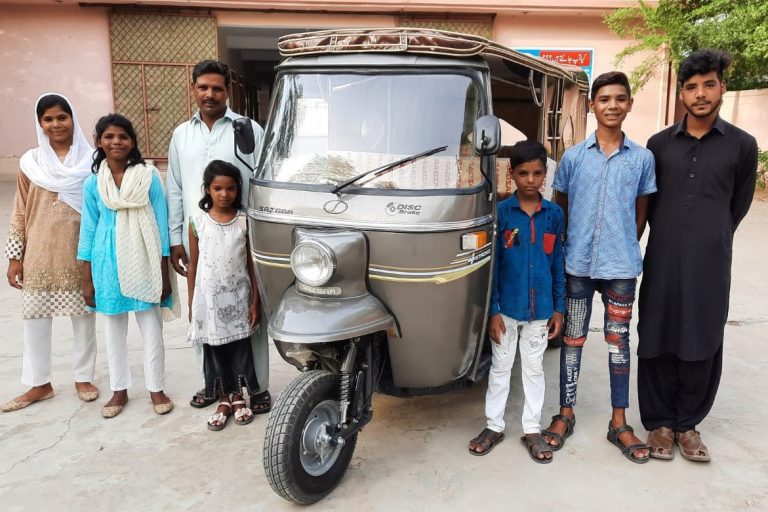 The family of a Christian girl in Pakistan who was tethered with a rope and shackled round her ankles, are making a fresh start after a Catholic charity provided them with an auto-rickshaw.

The vehicle, funded by Catholic charity Aid to the Church in Need (ACN), will enable Asif Masih, the father of 12-year-old Farah Shaheen, to find work as a taxi driver.

The auto-rickshaw is part of a programme of aid after Farah was discovered physically restrained in the home of Khizar Ahmed Ali (Hayat), a man more than 30 years her senior, who kidnapped the girl before forcibly marrying her and converting her to Islam against her will.

Faisalabad District and Sessions Court in February ruled the marriage invalid and ordered Farah be allowed to return to her family.

Too poor to care for themselves and living in an area judged unsafe for them as Christians, by then Farah’s family were in the care of a Christian group led by Bishop Iftikhar Indryas.

Thanking ACN for the rickshaw, Bishop Indryas said: “The aim of the rickshaw is to empower the family, to enable them to earn a living and avoid them having to be beggars.”

He added: “The family are so happy to have the rickshaw. It is an important for them to have some degree of sustainability.”

Farah’s suffering made headlines around the world earlier this year after ACN carried out a media campaign, amid allegations that the police ignored her father’s plea to trace his daughter and that, by the time they did find the girl, her torture had gone on nearly six months.

Neville Kyrke-Smith, National Director, Aid to the Church in Need (UK), said: “All of us were deeply shocked by what Farah and her family have had to go through – they have been so much in our thoughts and prayers.

“ACN’s benefactors wanted to offer them help and support and what better way to win back confidence and independence.”