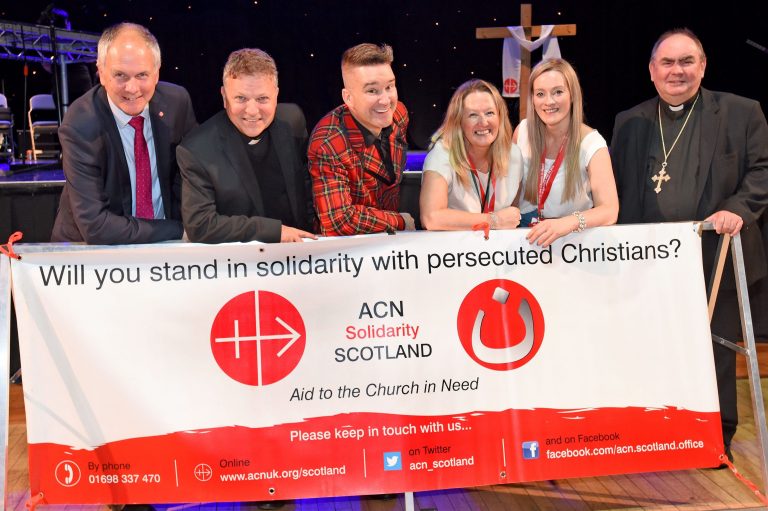 More than 700 young people in Scotland had a live link-up with students in the Syrian city of Aleppo at the climax of a youth rally organised by Catholic charity Aid to the Church in Need.

The students representing 22 schools from across Scotland had face-to-face time with students from the Christian Catechism Centre, which is made up of young people from across Aleppo, supported by ACN. 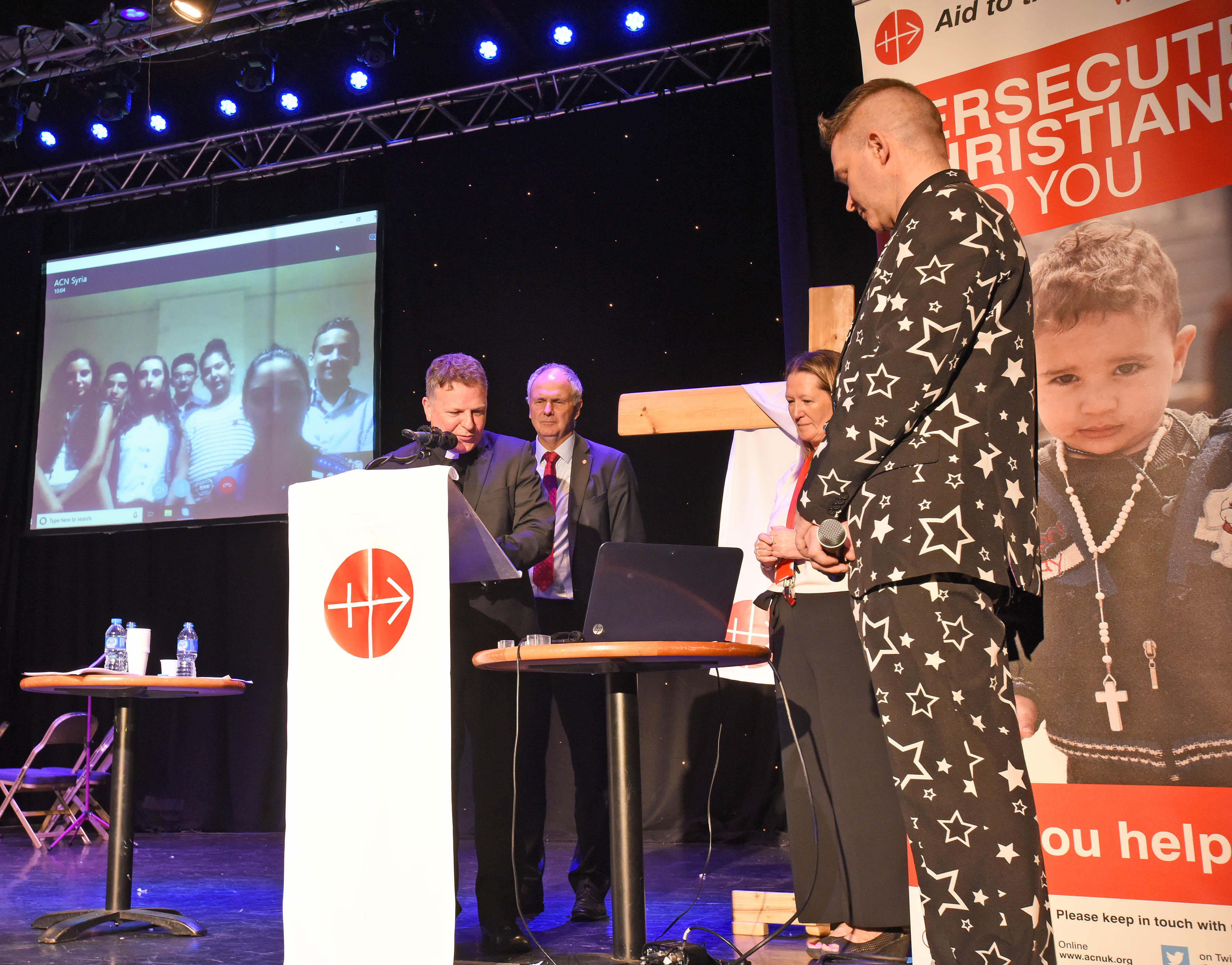 The youth rally, the fourth of its kind, took place at the Motherwell Concert Hall, and included a presentation on ACN projects in Syria by the charity’s Middle East projects coordinator Father Andrzej Halemba.

“Faced with the Church in need, we cannot be silent bystanders”

In his talk, Father Halemba described the plight of people in Aleppo, including a young girl, called Rita who he said was determined to stay in the country because of her faith.

Highlighting atrocities against Christian communities by Daesh (ISIS) and other extremists, particularly in Syria and Iraq, he said: “Faced with the Church in need, we cannot be silent bystanders.”

Benediction and Exposition of the Blessed Sacrament was led by Bishop John Keenan of Paisley.

At the event, which was compered by DJ Steve McKenna and supported by volunteers, teachers and parents, Bishop Keenan gave the keynote address. Also present were Bishop Joseph Toal of Motherwell and Father Martin Delaney, Youth Co-ordinator for Motherwell diocese.

Afterwards, Bishop Keenan said: “The ACN Youth Day and the faces and faith of the young people in Aleppo challenged and encouraged the young Catholics of Scotland who were there at this great event.”

Scottish schools and others participating in the day posted enthusiastic messages of support such as “uplifting and inspiring day,” “wonderful event” and “the live link to Aleppo @ACN_Scotland was a great opportunity to bring human issues to life.”

Seven schools spoke about their engagement with the charity at the event.

Robyn Moynes from All Saints Secondary School, Glasgow said: “We stand in solidarity with our brothers and sisters here today and we pray for change – for a better and more just world where our right to express our religious faith will become a reality no matter where we live or where we are from.” 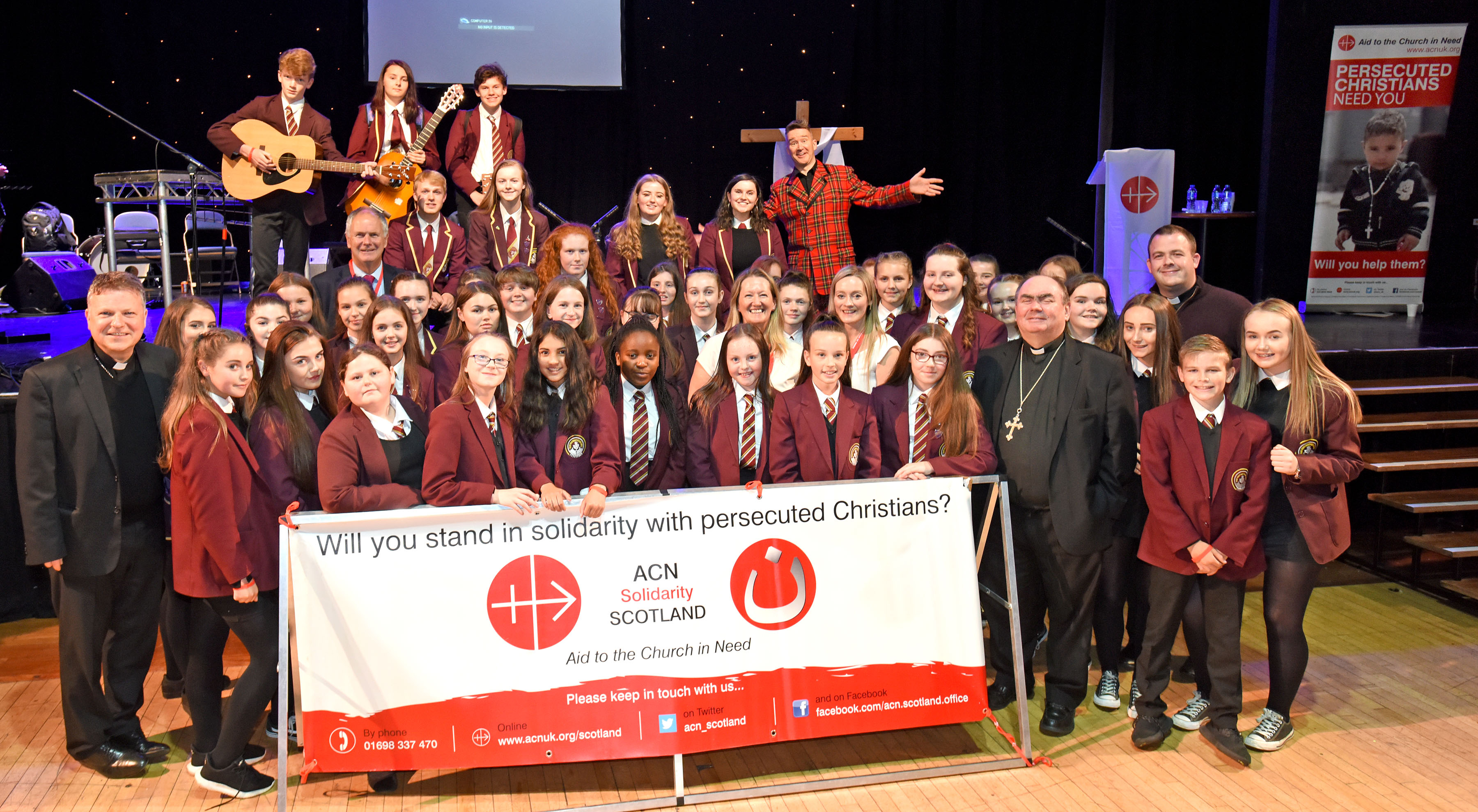 Event organiser Lorraine McMahon, ACN Head of Operations in Scotland, thanked all those involved in the day.

“The youth in our Catholic schools are inspiring”

Ms McMahon said: “This year’s ACN rally in Scotland was all we have ever wanted it to be – We had a perfect balance of Faith, music, entertainment, liturgy, witness, laughs, tears, emotions and inspiration that Clair [Sweeney, ACN Schools and Events Coordinator in Scotland] and I hope the schools will take home with them, digest and turn that thought into action in the new term.

“The youth in our Catholic schools are inspiring. They have a true sense of justice and with the guidance and support of their teachers we hope that after the rally, they will all open their hearts to the work of ACN.”

“The live link-up to Aleppo was outstanding… one student said: ‘Our faith is everything’”.

ACN UK National Director Neville Kyrke-Smith said: “The live link-up to Aleppo was outstanding – the students were young, smiling, attractive and so full-on about their faith. As one student said during the live link: ‘Our faith is everything’.

“And I am sure the Scottish youth and teachers will never ever forget that they are just like them…but in Syria they have been enduring a terrifying situation and much suffering.”