More help is urgently needed to encourage Christians to stay in Syria, according to a leading archbishop who has said that security problems, job instability and poor living conditions have left people “feeling like strangers in their own country”.

In a Holy Week interview with Catholic charity Aid to the Church in Need, Syriac Orthodox Archbishop Selwanos Petros Al-Nemeh of Homs and Hama said that about 50 percent of Christians had left Syria since the outbreak of the conflict in 2011.

“Christians would love to stay… this is their land”

He said: “Christians would love to stay and be bound to their country because this is their land… What is preventing them from staying is the instability in their work, the insecurity and vulnerability that they are facing, economic difficulties and dreadful living conditions.

The archbishop stressed how people “were bewildered by the immensity of the damage in the city [of Homs]” and the struggle to get help. 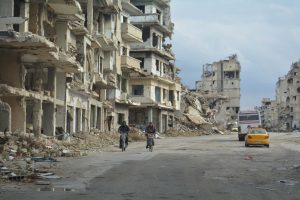 Destruction in Homs (© Aid to the Church in Need)

Speaking out against groups “facilitating the Christian migration”, he added: “Some Christian families felt as if they were strangers in their own country… as they did not have even a place to stay.”

But he went on to thank organisations such as Aid to the Church in Need for providing emergency help, including support to rebuild homes, adding that 2,000 houses in Homs had now been repaired.

He said: “We need a lot of support to rebuild and allow people to return.

“We hope in the assistance of organisations such as Aid to the Church in Need, to reinforce the re-construction effort, reaching out to more Christian families in need.”

Last year, ACN carried out more than 140 projects in Syria – of which at least 80 percent were emergency aid – a total of £5 million.

The archbishop described “two types of migration” in Syria: “The first one are people internally displaced to the more secure areas of Syria – those are waiting to come back to their places as soon as possible.

“The second type is the external migration of those, who went either to Lebanon or to Europe.

“Those who went to Lebanon await for some more stability to come back to Syria and they are willing to return whereas, I think, for those who left for Europe, it will be difficult to return.” 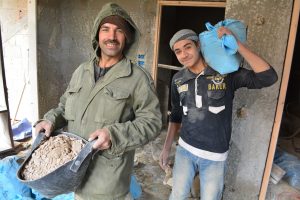 Describing the Christian community remaining in Homs, Archbishop Selwanos said: “We celebrate the Holy Masses in our churches again and our bishops are back to the city as well.”

“We will live the resurrection.”

Stressing the conflict’s impact on Homs, he said: “Christianity is rich with numerous martyrs who died because of their faith… [A]round 700 – 800 Christian martyrs sacrificed their life in the old town of Homs.”

With Easter approaching, Archbishop Selwanos thanked ACN benefactors for their support, adding: “We will live the resurrection. We hope for peace and happiness, because God gives us the triumph over death. 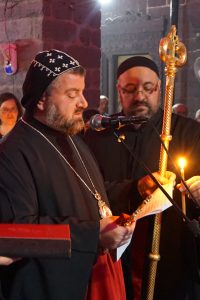 “We pray our God to give peace to the whole world, that we can live peacefully and happily together.

“May the peace of the Lord be with all people and may he bless organisations, especially Aid to the Church in Need and all people of goodwill who help us. Thank you.”