Buckingham Palace was the setting for a historic concert – in support of persecuted Christians from all denominations – that brought together the renowned choirs of the Chapel Royal and the Sistine Chapel.

The Ecumenical Concert of the Choirs of Her Majesty’s Chapel Royal, St James’s Palace, and the Sistine Chapel took place yesterday (Thursday, 24th May) in the presence of HRH The Duchess of Gloucester.

The audience in the Ballroom of Buckingham Palace heard music of historical importance to the Sistine Chapel and the Chapels Royal, including pieces by Purcell, Weelkes, Palestrina, Parry, Byrd and Britten. 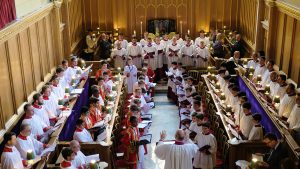 Chapel Royal – Evensong at the Chapel Royal, St James’s Palace, with music from the Choir of Her Majesty’s Chapel Royal, and the Sistine Chapel Choir (© The Royal Family)

Both events highlighted the work of Aid to the Church in Need, the Catholic charity which supports persecuted and suffering Christians over the world – especially in the Middle East.

Christian persecution was also the theme of HRH The Prince of Wales’s Easter video message this year, in which he said: “At this time, we think especially of those Christians who are suffering for their faith in so many parts of the world.

“This concert is a great sign of support, not just for Christians in the Middle East, but for all communities who are trying to rebuild…”

In his speech at last night’s concert, Neville Kyrke-Smith, National Director, Aid to the Church in Need (UK), expressed his thanks for ACN being the focus of the event.

He added: “This concert is a great sign of support, not just for Christians in the Middle East, but for all communities who are trying to rebuild and who want to deepen bonds of trust and understanding.”

Aid to the Church in Need’s priority Iraq project is support for 120,000 Christians and others from Nineveh and Mosul.

Having provided emergency help after they fled Daesh (ISIS), the charity is now – with the militants’ defeated – enabling the communities to go back by rebuilding homes, churches, dispensaries and other centres.

In Syria, ACN is providing emergency and pastoral help to families in areas worst affected by violence including Damascus, Aleppo, Homs and elsewhere – food, shelter and medicine – as well as pastoral aid.