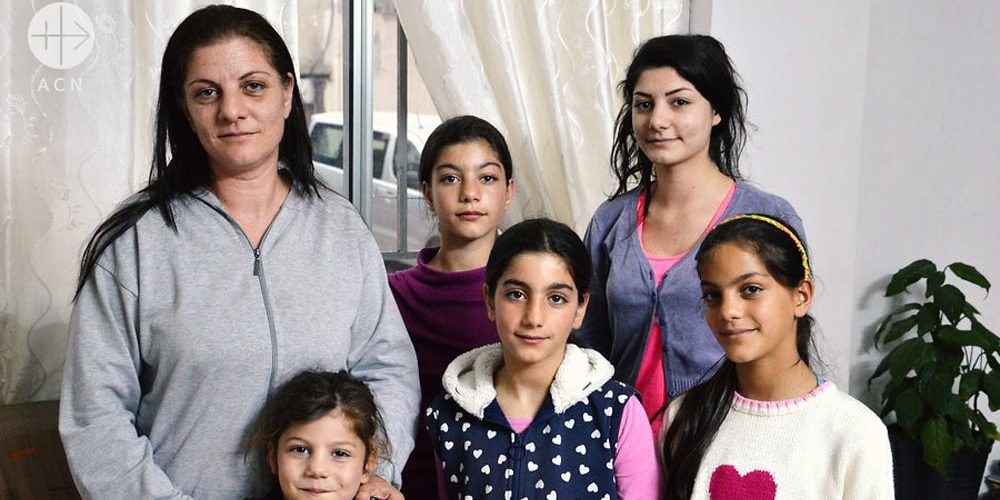 Thanks to the support of the pontifical foundation Aid to the Church in Need (ACN), the local church is helping thousands of families who were displaced throughout the war and now find themselves in dire straits in the Valley of Christians, a rural region in Syria near the Lebanese border.

Suffering and hopelessness have become the norm for Syrians, who have now been living in a country torn apart after seven years of warfare. Not only do they have to deal with the daily life plagued by terrorism as well as the loss of their homes and all of their possessions to bombs. They have also lost people beloved to them – to violence, disease or the difficult living conditions of a society devastated by violence.

Rasha Drazy was only 23 when her husband, Michael, died. The young lorry driver drove the route from the Valley of Christians to Damascus. One day he was hit by sniper fire. He died instantly. She not only lost her young husband, but also her family’s financial support. The mother of two children found herself in a terrible situation at the very beginning of the armed conflict in 2011. 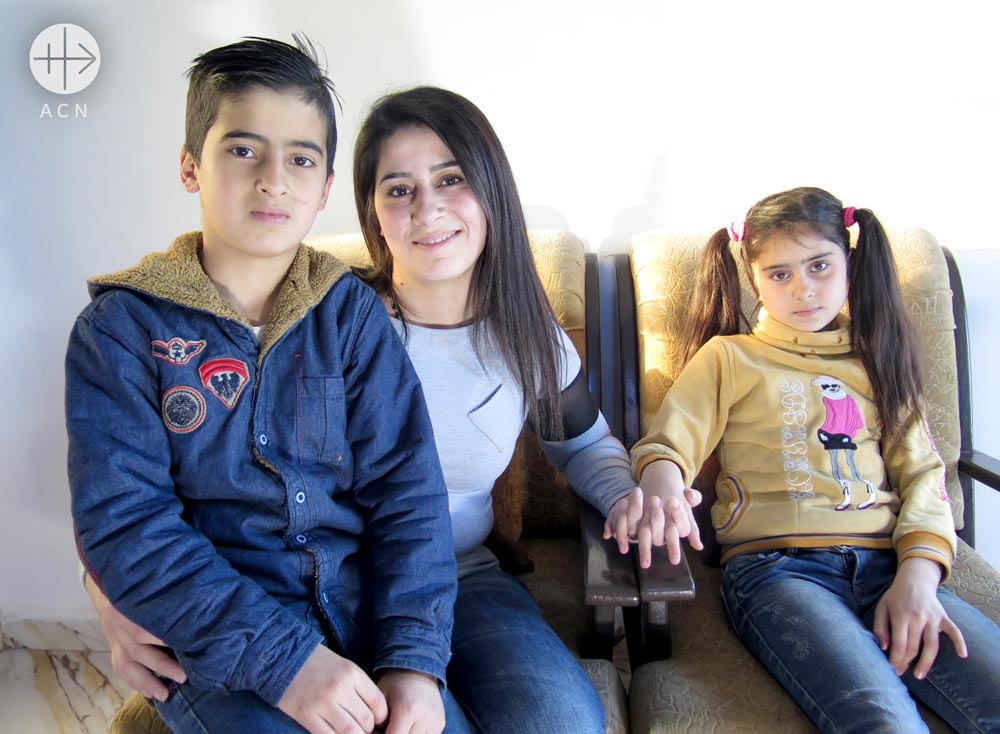 “We lived in Damascus, then [we] fled to Marmarita to escape the rockets being fired onto the capital on a daily basis. We arrived here in 2012. My husband was killed just a few months later,” Rasha explains, her eyes reflecting her deep sorrow. In spite of her youth, her features are marked by all the hardships she has been through. Her children sit next to her, 10-year-old Michael and 8-year-old Rachel. “Life was difficult even before the death of my husband. The children were no longer able to go to school because it was closed due to the war. Thanks to our meagre savings, we were able to survive until Michael found work again.”

Stories such as this can be heard all over the country. The traumatic  witness of thousands of women –Mother Courage personified – who have lost their children and husbands during the war. Many have not only lost people they loved, but also the provider  for the family’s wellbeing.

A similar story is told by Darin Abboud, who has recently been widowed. Her husband just passed away after having suffered a stroke two years before. “I am self-employed, sometimes working as a hairdresser, sometimes in the fields helping to bring in the fruit and vegetable during the harvest. I do everything I can to support my daughters,” the 38-year-old mother said. “My five daughters are what motivates me to go on living. My happiness revolves around helping them continue to go to school, find work and be happy.” 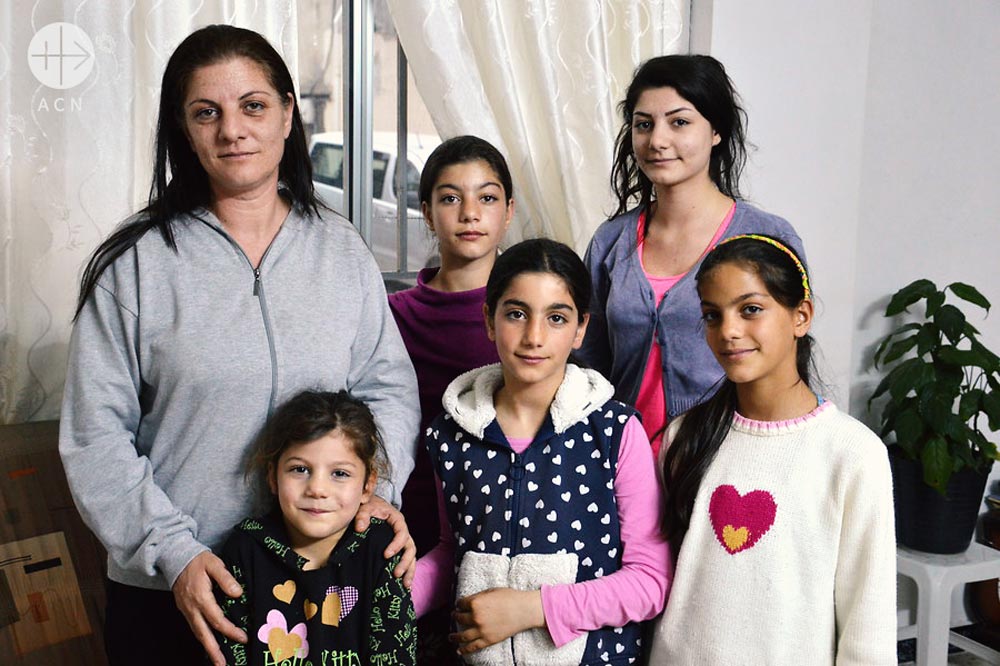 Darin Abboud with her five daughters.

Eighteen-year-old Maya is the oldest daughter. She is about to take her final  examinations at school, even though she does not know what she wants to study yet. Next in line are the 12-year-old twins Maram and Mary, both of whom sing very well. “We learned to sing in the parish choir. We enjoy singing there very much.” Mirna is the fourth daughter. She can recite beautiful poems by heart in an Arabic that is smooth and gentle. Meriam is not only the youngest, but also the most cheerful and boisterous. The loss of their father have not extinguished the family’s happy memories and life together.

As is written in the Gospels, it is the duty of Christians to provide solace to the poorest and those most in need.  “If a brother or sister is ill-clad and in lack of daily food, and one of you says to them, ‘Go in peace, be warmed and filled,’ without giving them the things needed for the body, what does it profit?” (James 2:15-16) Thanks to ACN the local Church is supporting these women, widows –  all Mothers Courage – who are facing particularly difficult challenges in Syria.

“The aid we receive from the parish helps us a great deal. We have also received a lot of help from our neighbours and relatives,” Darin said, “but without the financial support of the Church, I don’t know what would have become of me and my daughters.” She stressed that the parish has been supporting her since the death of her husband. Because of the Church’s support she and others have bee provided with daily essentials for all the families. 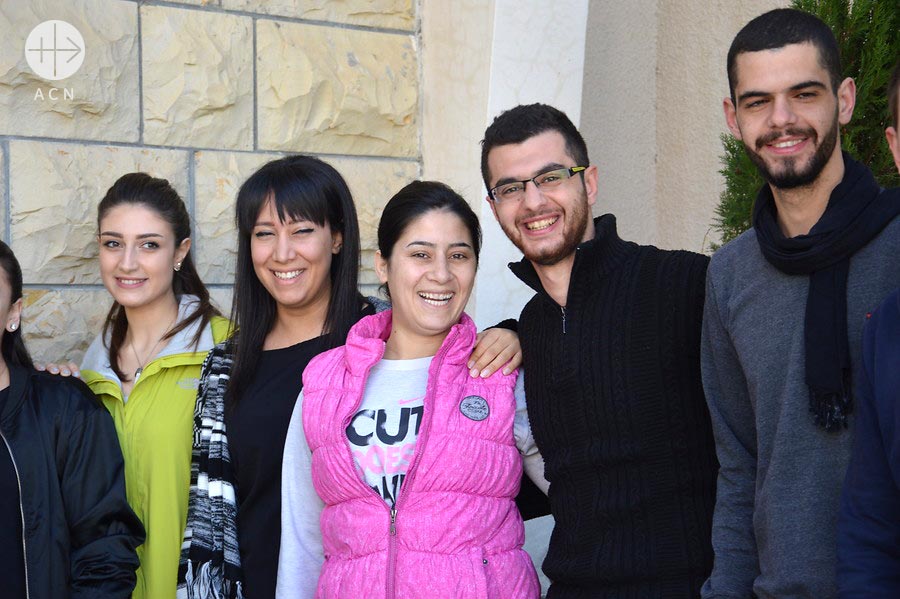 Rasha Drazy, in the centre dressed of pink, a widow who is part of the gruop of volunteers of the St. Peter’s Relief Centre in Marmarita.

More than 2,000 families receive emergency packages from ACN each month through St Peter’s Aid Centre in Marmarita, which is run by the Catholic Melkite Church. “This aid revived our faith and hope,” Rasha commented. “The Church was right there for us. Because of this, we have become more involved in the parish. I belong to the team of volunteers that coordinates the emergency relief for displaced families in the Valley of Christians.” While she serves tea, Rasha Drazy talks about how there came a day when she decided not to let herself be pulled under by despair. Rather, she wanted to help other people also  going through the most horrific moments of their lives. “In our current situation, it is impossible to know what the future will bring. That is why we try to live each day as best we can with the little that we have. I try to teach my children to have faith, to have joy in being close to Jesus. This helps us not lose hope when times are difficult.”

Darin and her daughters wished to express their gratitude. She said; “The people who help us change the lives of many families. Particularly to those who help us without knowing us, I would like to say that you have given the important witness of generosity. Thank you.”