Ghassan Abboud and his wife Maha Sanna used to live in Homs with their two sons, Joseph and Michael. But exactly five years and seven months ago their lives changed completely, on a day that will be forever burnt in their memories. “We were at home”, Maha recalls. “My son Michael was standing quietly in the sitting room, when we suddenly heard the sound of breaking glass. When we went to see what had happened, we found Michael lying prostrate on the ground. A stray bullet had gone through the window and straight through his head. He died instantly.”

The civil war in Syria had erupted in the city of Homs just a few months earlier, and the initial outbreaks of urban warfare had unleashed bloody bombings and sniper attacks throughout the city. The street protests calling for an end to the regime of President Bashar al Assad had prompted a hardline response and fierce political repression. Everything dissolved into a civil war which led to a division within the army and within society and to the appearance of numerous armed groups of a jihadist stamp. As of today, the death toll stands at around 500,000 people, and one of these victims was the youngest son of the Abboud family. 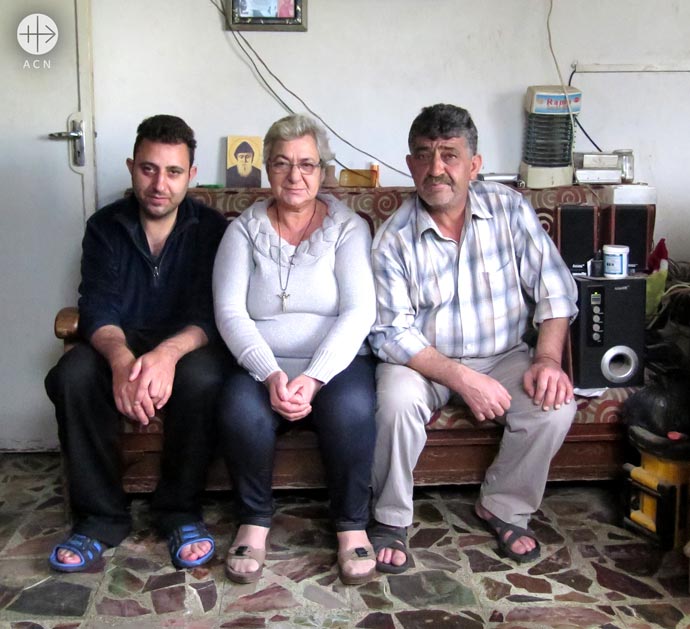 “Michael was a wonderful boy. He worked as a TV film producer and dreamt of becoming a film director one day”, his mother explains, sadly, yet with a tinge of pride. Following his death, and due to the outbreak of still worse fighting within the city, the family decided to leave. “We were planning to leave the country, but we were refused a visa. We didn’t have much money and so we gave up on the attempt. Instead, we came here to the Valley of the Christians”, Ghassan explains.

All these years the Abboud family have lived in a small rented house in the village of Almishtaya, one of the 20 or more villages that make up this region, which was known before the war as a local holiday destination for the people of Homs. Many of them used to come here from the city to enjoy the peace of its valleys and mountains. Maha explains that their economic situation was not good enough to be able to afford a rented home in another town where there was no fighting, but at the same time they couldn’t go on living in Homs, surrounded by so much violence. “Ever since we arrived here, we have been supported by the priests and the young people of the Saint Peter’s Centre in Marmarita”, she tells us. “Without their help to pay for this house, for food and the medication I need for my heart, I don’t know where we would be today.”

Her husband and her other son Joseph both lost their jobs when they left Homs. In the Valley of the Christians they managed to find work for a few months, but the economic situation of the country and the saturation of the refugees has caused the work to dry up, and the wages are in any case very poor. “I am self-employed”, Ghassan explains. “But now I’ve stopped working. I am over 60 now, but I don’t get any pension.” His son Joseph does have work, as an electrician, “but the employment situation here is very unstable. I would like to return to Homs and earn my living there”, he tells us.

The Abboud family is one of over 2000 families who are receiving monthly subsistence aid distributed by the local Church, thanks to the financial support of the international Catholic pastoral charity and pontifical foundation Aid to the Church in Need (ACN).

Many of these families have recently expressed their intention to return to their former homes as soon as possible, and as soon as they can be rebuilt. “I am almost certain that we will be able to return soon”, Ghassan tells us. “We were able to return to Homs and see the state of our house. Although it is partially damaged, it is not that bad. But nevertheless it is still difficult to live in Homs, with all the ruin caused by the catastrophe and the many shortages of electricity and water, but nevertheless it’s always better to be in your own home rather than living here as refugees. Besides, having to pay rent is also very costly”, he acknowledges.

With this hopeful message about their return, Ghassan, Maha and Joseph say goodbye to the small visiting group from ACN who have travelled to Syria to learn about the situation of the refugee families and their needs. “What gives us hope is the support we receive from Iliash, the young man in charge of coordinating the aid at the Saint Peter’s Centre. The priests and the Catholic Church are supporting us in every way. Theirs is the only help we receive; it is a testimony to their generosity, and it is all the more precious to us, given that we are not Catholics, but Orthodox Christians”, Maha explains.

“My faith is what gives me the strength to continue, despite so much suffering. You tell us that many people in Europe and other countries feel strengthened in their faith when they hear about our story and our perseverance in the face of our difficulties. I can only say ‘Alhamdulillah’ (God be praised! in Arabic)”, Ghassan remarks. And as they lean over the balcony of their home and wave goodbye, they warmly add: “Shukran ktir ktir  (Many, many thanks!)”