“If any man pretends that I violate my faith to my king because I will not reject the authority of the Holy See of Rome, let him stand forth, and in the name of God I will answer him as I ought.”

St Anselm was born in Piedmont, Italy. He lost his religious fervour when he was 15 years of age but returned to his Catholic religion some years later. This zeal was in greater strength and never left him for the remainder of his life. His life echoes the test of faith in 1 Peter (1:7) “…you may have to suffer various trials, so that the genuineness of your faith, more precious than gold which though perishable is tested by fire, may redound to praise and glory and honour at the revelation of Jesus Christ.”

With his sense of vocation revived, he became a monk and thereafter confessor to King William Rufus during his illness. When the king recovered his health however, he relapsed into his former sinful ways; he plundered Church lands and tried to sell Church symbols to nobility such as the ring and crozier.

The saint challenged the king and was labelled a traitor by successive kings and others in authority for upholding papal supremacy in matters of spiritual jurisdiction. St Anselm’s statement of conscience appears at the start of this piece. Although the saint remained respectful to the king, he was forced into exile for his refusal to bend the knee to man’s limited power in preference to Christ’s domain. 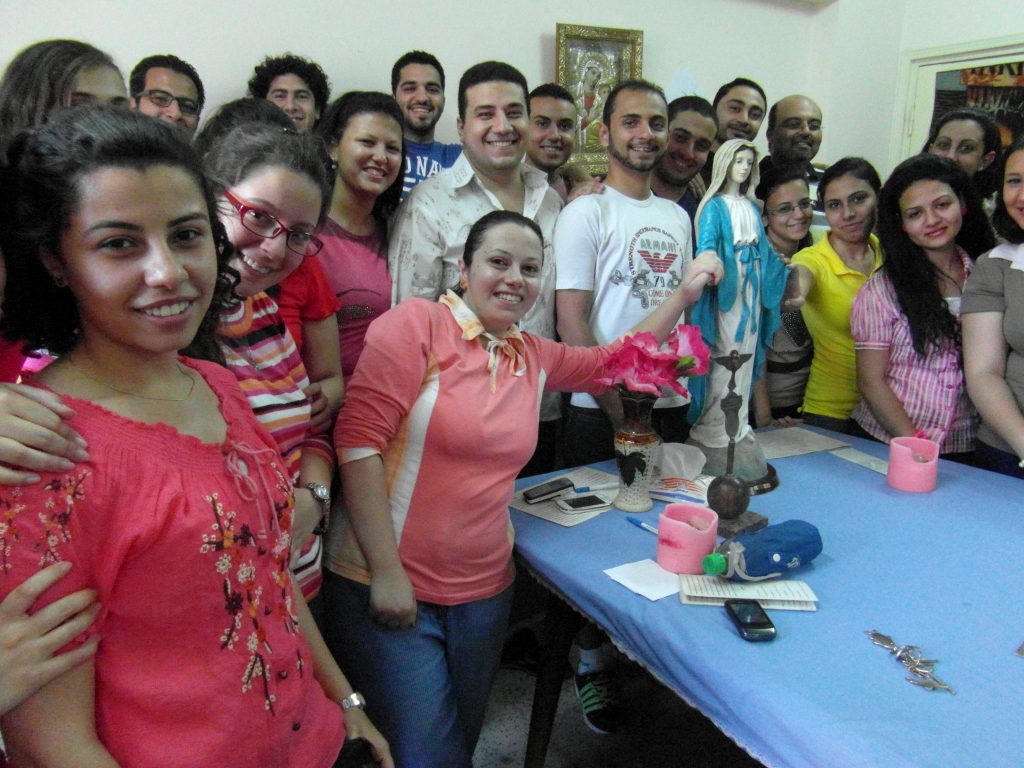 St Anselms was famous for his devotion to Our Blessed Lady. Pictured above are devout Catholic youth members of the Legion of Mary Holy Family Coptic Catholic Church, Zaytoun, Cairo in 2013

Aid to the Church in Need, the Catholic charity for persecuted and other suffering Christians, is sponsoring 3,000 young Catholics from every diocese in Egypt as they travel to Cairo to welcome Pope Francis when he visits in late April.

As St Anselm’s faith was tested, Catholics in Egypt have their faith challenged by the constant danger of attacks by extremists today.

Egyptians Catholics are taking part in their peaceful pilgrimage despite threats of dangerous attacks, as have already happened, notably the Palm Sunday bomb blasts on 9 April at St Mark’s Cathedral, Alexandria, and St Georges Church in Tanta city. Altogether, at least 45 people – mostly churchgoers – were killed and more than 120 were injured.

Neville Kyrke-Smith, National Director, ACN (UK), said: “We are pleased to support Egyptian Christians welcoming Pope Francis to their capital this April. “We pray for our Catholic family: the 3,000 children and our Holy Father’s safety as well as all other Christians gathering with their Muslim neighbours as an expression of tolerance after recent attacks by extremists.”  He added: “Our prayers go out to them as they embark on their peaceful pilgrimage. We wish them all a safe and spiritual enriching journey.” See article.

John Pontifex is Head of Press and Information at Aid to the Church in Need and Master of Ceremonies at St Anselm’s Catholic Church in Tooting Bec, London. Both charity and church are inspired by the Christ’s message of “love thy neighbour” which also inspired Fr Werenfried van Straaten to establish the charity after World War II.

St Anselm’s Church webpage concerning outreach states that “reverence is our watch word” in the training of altar servers. The charity is delighted to add humility and generosity regarding the support shown by the church to persecuted Christians and thus to Christ himself as he helps them carry their cross worldwide today.

Starting in September 2015, the parish has collected almost exactly £30,000 for the Suffering Church in Syria. This has enabled Sr Annie Demerjian to provide emergency aid to thousands of Christian families and others in great need in Aleppo.

In March of this year Sr Annie repeated her thanks to all ACN benefactors: “Thank God for everything you are doing for us, helping families… We pray for ACN benefactors with open hearts… I have prayed that ACN would say, ‘Yes’ to our appeals for aid, sometimes I have had tears in my eyes when they have been accepted.” She confirmed the support is helping Christian families: “You cannot believe how much you are helping the families and how much you are relieving their suffering… You stand with our families to help them stay in their own lands and help them retain their dignity and their lives.”

Whoever acts like St Anselm is defending the Church from unfair attack is helping to spread the message of the Gospel.

St Anselm’s faith waivered as a teenager but he returned to his Catholic faith all the more robust for having being tested. He refused to follow the will of powerful men when challenged on the position of Christ’s Church.

“For no other foundation can anyone lay than that which is laid, which is Jesus Christ. Now if any one builds on the foundation with gold, silver, precious stones, wood, hay, straw – each man’s work will become manifest; for the Day will disclose it, because it will be revealed with fire, and the fire will test what sort of work each one has done.” – 1 Corinthians 3:11-13