After nearly three years in exile in Kurdistan, a 10-year-old girl and her family, who fled Daesh’s (ISIS) genocidal violence, have returned to their home town in Iraq.

Helda Khalid Jacob Hindi, who went back to Qaraqosh on the Nineveh Plains with her parents and younger brother, spoke to Catholic charity Aid to Church in Need about the night of 6th August 2014, when Daesh seized her home town.

“We had to escape the living hell of violence”

She said: “Alarm bells rang out in our streets – we had to escape the living hell of violence and terrorism.

She added: “We had no idea how long we would be displaced from our beloved city. The days passed and we lived in torment and tragedy until we got used to it.”

Up to 44,000 Christians fled Qaraqosh – a Syriac Catholic majority town – when it was seized by the extremists.

The majority sought shelter in Erbil where ACN backed the local Churches’ emergency aid programme – which included building eight schools so that children could continue their education.

Miss Hindi said: “I was sad, clinging to hope of returning to my old school, but I made new friends.

“And today, by God’s grace, we have returned to our town and I am back in my old school among my old friends.”

“God has been with me always.

God is with me everywhere”

Saying that her faith had sustained her through difficult times, she told ACN: “We had only God and we never stopped believing in his power and his mercy for all those hurting in Iraq and around the world.

“Whenever we approach him in prayer and faith, we feel joy and confidence without end.

“My family, friends and relatives never felt that God was far away from us. As far as I can see into the past, God has been with me always.

“God is with me everywhere and I make sure to always keep nearby some pictures of Jesus Christ and a Bible.”

“My message to the West: Help us. Have compassion.”

Calling for assistance from the international community she said: “My message to the West is to do as much as possible to support Christians in Iraq because they are close to extinction.

“Help us. Have compassion, and you will be rewarded by the one who is in heaven.

“We want stability and peace. Let’s work together and pray together for peace and love – for all of us.” 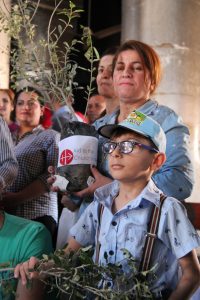 ACN is working with the Nineveh Reconstruction Committee to rebuild Christian towns and villages in Iraq.

They have renovated 188 houses to date and are planning to renovate a further 554 homes in the towns of Qaraqosh, Baghded and Bartela.